Buying fresh, local food has never been more important—besides being delicious and more nutritious, it will help sustain your local family farms. Joining a CSA is one way to do that. Plus you’ll get to know the farmers and see where your food comes from. Read on for a profile of one family farm with a meat CSA (and raw milk) in the Berkshires.

Amelia and Will Conklin own Sky View Farm, located in Sheffield, MA—one of the more agricultural towns in Berkshire County with a rich tradition of dairy farming. Both of their grandparents were dairy farmers. (We turned to Will and Amelia for their singular insights into farming in the region when writing the introduction to The Berkshires Farm Table Cookbook, due out May 19, 2020 and available for pre-order now.)

Given that she comes from farming stock (her father owns Wolfe Spring Farm just up the road), you might think Amelia was destined to be a farmer herself. “Definitely not, I wanted to get out of here and live in a major city,” she says. That she did, studying international development in Washington, D.C. before joining the Peace Corps, where she was stationed in a small agricultural village in Paraguay. “While there I thought I could move back to Sheffield and live in a small farming village for the rest of my life.”

Will, too, had been doing different things, including starting Greenagers in 2007—a nonprofit whose mission is providing employment and volunteer opportunities for teens and young adults in the fields of conservation, sustainable farming, and environmental leadership. And despite having the run of 50 acres of land that had been in the family for generations, farming was not on his radar—until he met Amelia. 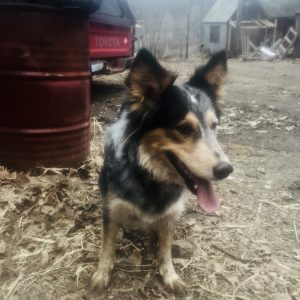 “Will was fencing in all this pasture but he had no animals, and I had a dairy cow but no land. So we struck a little business deal and then had lots of excuses to meet up all the time and talk about the details of our venture,” Amelia says.

That was the summer of 2012 and six months later they were engaged and by 2014 they were married. Their daughter Vera (named for Will’s grandmother) was born in 2019.

On one recent visit, Will’s sister, Elizabeth Orenstein, who lives with her boyfriend on the property, was pitching in. “We do some chores and barter for rent.”  (By day, Elizabeth is the education and outreach coordinator for Berkshire Environmental Action Team, or BEAT.)

Their dog Katoomba, named for an Australian town (she’s part Australian Cattle Dog), was intent on fetching the frisbee. “She basically shepherds the other dogs on the property,” Elizabeth says.

All in the family…

With a total of around 30 cows, the couple has come a long way from Amelia’s first one. The dairy herd numbers eight, including the younger stock (and the photogenic mama cow shown here); only two or three are typically milked for the raw milk. 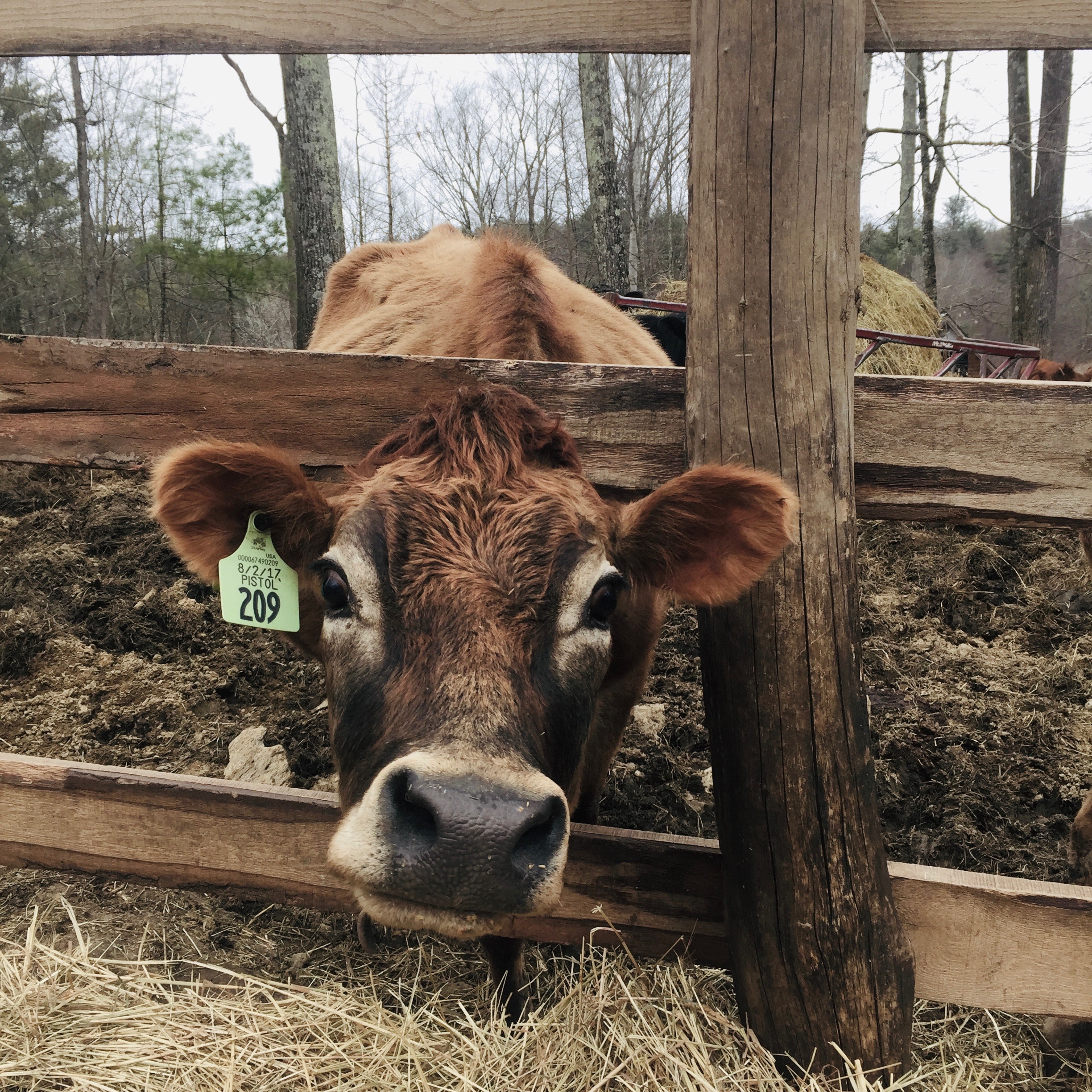 Pigs were added pretty early on, but thanks to their three sows (each weighing in at approximately 400 pounds), last year was the first time they didn’t have to buy-in piglets to meet the production. 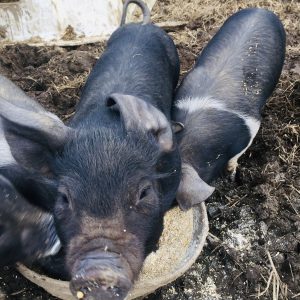 Amelia says they are still figuring out how many litters the sows can have. “You can keep a cow in production for 15 or 20 years and then keep as a pet for a few more, but I’m not sure about pigs.” (She also says the pigs’ winter habitat is not the most glamorous—they move to a much bigger space come summer—but the days-old piglets are awfully cute.)

Given their setup, Amelia and Will have never seen the need to be certified organic. “We are very transparent about our practices and what we do and how we do it—everyone comes here and sees how we raise our animals. It’s nice to have that label when you don’t have a direct relationship with your consumer, so people know at least it has this minimum level of oversight. But organic does not equal pastured, non-GMO meat,” Will says.

He also explains that with livestock, the use of antibiotics is prohibited under the certified organic protocol. “For us, there are certain cases where an antibiotic is going to save an animal’s life. We are not going to broadcast it through the herd but use it the way we would do for ourselves.”

Farming for a living

In Massachusetts, raw milk can only be sold on-farm (and not even at farmers’ markets).  Sky View Farm makes it available by subscription, though people sometimes drop by to pick up a bottle. Will and Amelia are big proponents of raw milk, saying it’s all they drink, including 18-month-old Vera. “It is the kids of our customers that keep them coming back, as they are able to tell the difference—even more than me,” Amelia says. 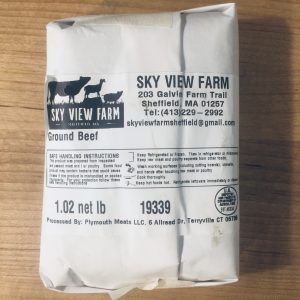 The meat CSA started in 2014 with ten members, mostly through word-of-mouth and Facebook, and now that’s up to around 45 full- or half-share members. Pickup is once a month and is a free-choice deal—everything is laid out in the freezers and people can take what they want but are asked to limit their take of naturally limited cuts like bacon and tenderloin to two pounds each. Meats include pork, beef, and lamb, plus chicken during the summer and fall—and include some choice options like oxtail and pork belly.

A full share is $125 per month for 12 pounds of meat, for an average of $10 per pound—which might seem expensive for ground beef but is a veritable bargain for rib-eye steak. “We share our financials with our members, some of whom encourage us to raise our prices, but that’s not feasible for everyone,” Will says. Indeed, Sky View Farm offers a number of subsidized shares through Berkshire Grown’s Share the Bounty program.

On average they add three to five full shares a year, as it involves long planning. “With pigs it’s a fairly quick turnaround but there’s a two-year growing period with beef. We could buy in mature animals but that’s not the point,” Will says.

They also sell at the Berkshire Grown’s winter markets and “do a few grilling gigs,” including at the Old Tone Music Festival and others of that ilk. (Now that those markets are cancelled due to the pandemic, Will and Amelia say they are feeling the impact.)

“We have to do it all and even that doesn’t make a living for a family, honestly,” Will says. “We are working toward profitability at a level you could call meaningful income though we still have to rely on outside income.”

Will continues to run Greenagers, while Amelia works part-time at Flying Deer Nature Center, a wilderness school and community with year-round programs to help children, adults, and families foster a deep connection to nature. “So it’s about cobbling that together,” Will says. 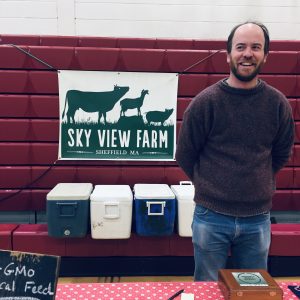 Then there’s the portable saw mill, which allows them to sell native lumber directly to area builders and homeowners—some of the boards on the lot were for an owner who is rehabbing a barn in New Marlborough—or even set up shop at someone’s house. “This predates the animals and is and always has been more profitable than farming,” Will says.

Planning for the future

“There seems to be this notion of always expanding, maybe it’s the cultural mentality, but a few years ago we started to rethink that approach,” Amelia says. Instead their future focus is twofold: To get the land managed the way they want it to be and to improve the processes.

“For the sustainability of the enterprise, our targets are increasing efficiencies and lowering costs,” Will says. For example, they bought a grinder so they could start with whole grains and grind and mix hog ration themselves, rather than relying on the (more expensive) pre-ground, pre-mixed feed.

What makes that possible are funds from state and federal agencies. “A lot of agro relies heavily on grants, subsidies, and tax credits, which is not inherently bad but at the same time is a continuous struggle for most farmers,” Will says.

Amelia points to a “huge grant” from the Massachusetts Department of Agricultural Resources (MDAR) as the necessary funding for the purchase of a walk-in freezer and to build a new greenhouse, among other improvements. 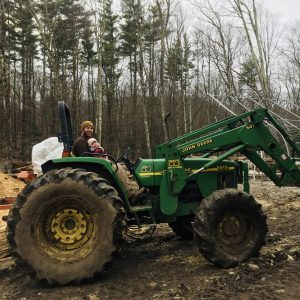 The farm is currently working with the Natural Resources Conservation Service (NRCS) in a grant and cost-sharing program on several environmental fronts, including bringing in material to improve their animal pathways and roads (more solid, less muddy) and provide a better transition for the cows.

“Because of the lay of the land, our animals have to essentially walk through wetlands to get to pasture, so the concerns are run-off and sedimentation,” Will says. Seasonal or perennial streams also intersect the fields, so the NRCS has helped them put up fencing.

Another goal is to create a covered, deep-bedded pack barn where all the cows can be together in winter—and then at the end of the winter all the bedding is cleaned out and composted and then used to nurture the land. This is something they practice already on a smaller scale, but having more space and the infrastructure will allow them to do it more effectively. As Will sees it, that barn will not only make things neater but improve the animals’ well-being and in turn increase milk production. “Those are the incremental things that will make the farm profitable. There’s no silver bullet.”

Will and Amelia have also toyed with the idea of making cheese—they’ve just put up some hard cheese for aging, as a trial run. But for the time being the goal is to steadily build up the milk supply (to four or five cows) and stick with liquid milk. “It’s a lot of work to make cheese and you have to charge a pretty penny for it,” Will says, pointing out that organic milk from a store (often shipped across country) is in many cases the same as what they charge for their raw milk on the farm—and with much less fossil fuel inputs.

“The price of our meats may seem high in comparison to what you find in a normal supermarket, but not when you factor in the healthfulness of those meats—for our customers, the animals, and the planet.” 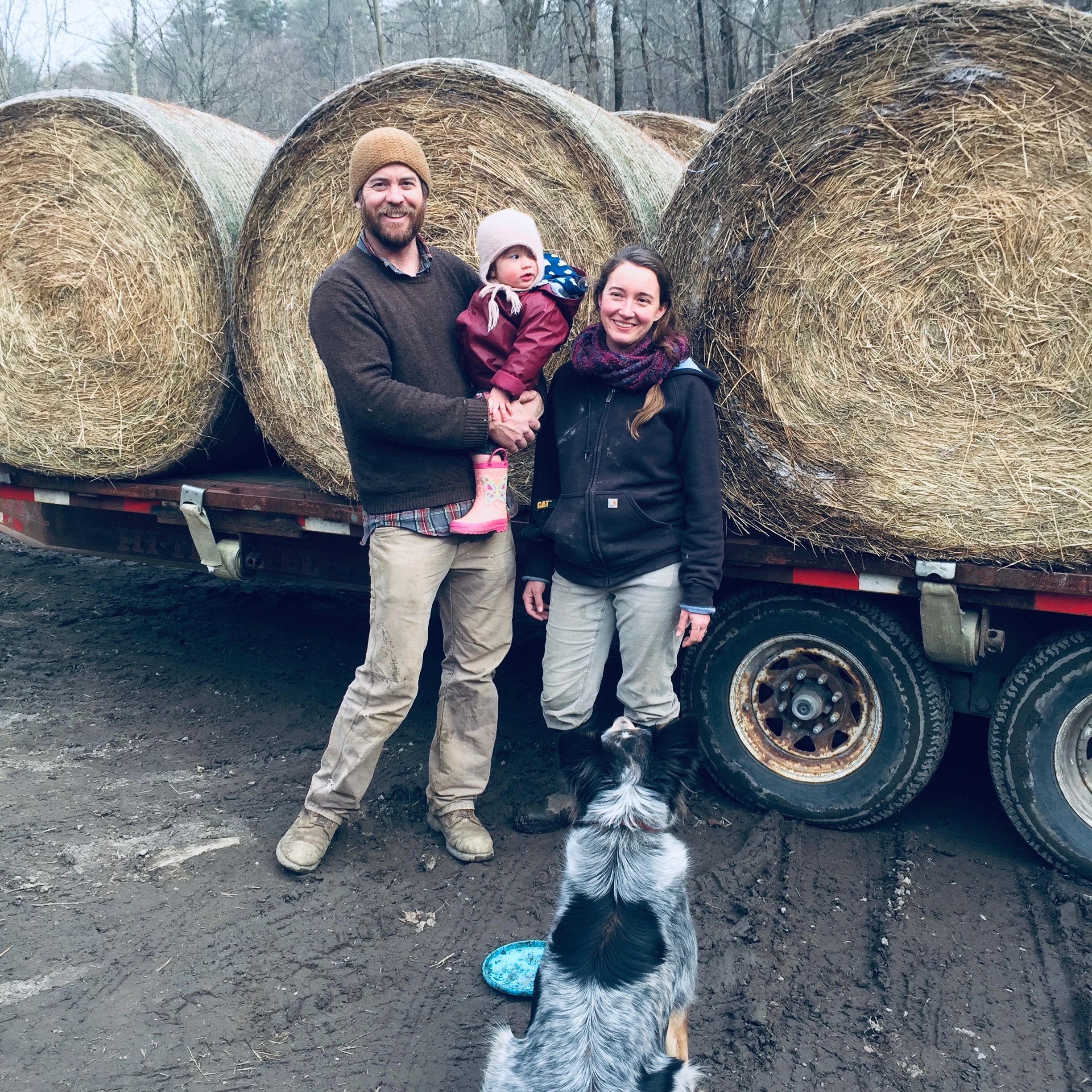