We’ve been revisiting some of the farmers profiled in The Berkshires Farm Table Cookbook (out May 19!) and sharing their stories on this site. As everywhere, farms in the Berkshires are facing new challenges in light of sheltering in place. Here’s how the family behind Square Roots Farm has risen to the occasion.

It’s a sunny April day in Berkshire County, and a perfect excuse to take a leisurely drive (cabin fever being what it is) to reach Square Roots Farm, in Lanesborough, MA. The farm is perched on a hill with sweeping views leading down to a sparkling lake. Like other local farms, Square Roots has pivoted from selling at farmer’s markets, now closed during social distancing, to selling directly to consumers.

“We are selling a lot more stuff than we would normally be selling right now, so that’s good,” says Michael Gallagher, who has run Square Roots with his wife Ashley Amsden since 2010. 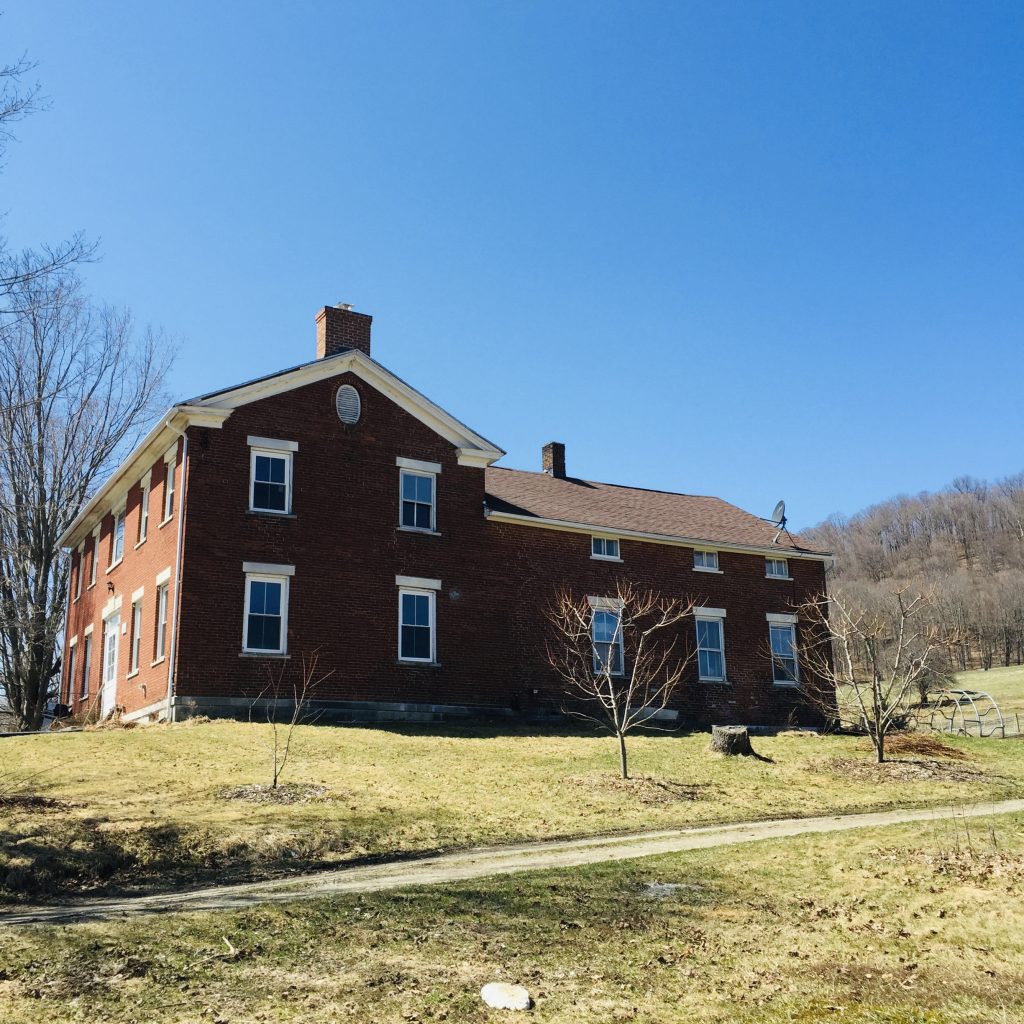 The story behind Square Roots Farm

Having met during an apprenticeship at Maple Wind Farm, in Huntington, VT, the couple leased four acres on a 50-acre farm for about three years in Clarksburg, MA. When the owner died and his wife wanted to sell the property to them, they knew it wasn’t where they wanted to be but didn’t know where else to go either. “And then this place came up on the market and Berkshire Natural Resources Council put out a call for proposals and we bought it in 2013,” Michael says. (The former Fletcher Farm happens to be a mere two miles from Michael’s childhood home. It also sits directly across from Lakeview Orchard.)

They now have 185 acres, 120 on the side of the street where the house is located—the couple has two young children, Maggie and Everett—and another 60 on the other side where the greenhouses are located.

Not that all 180 acres are arable; Michael explains that only 60 are open and the rest is woods, “and they’re not particularly useful woods.” Of the open land, two acres are devoted to growing vegetables and the rest is used for grazing their 30 cows—except for one field that’s a ways away and difficult to access. “But we’re going to figure out a way to get the cows down there to graze it this year because otherwise we’ll be short on grass.” 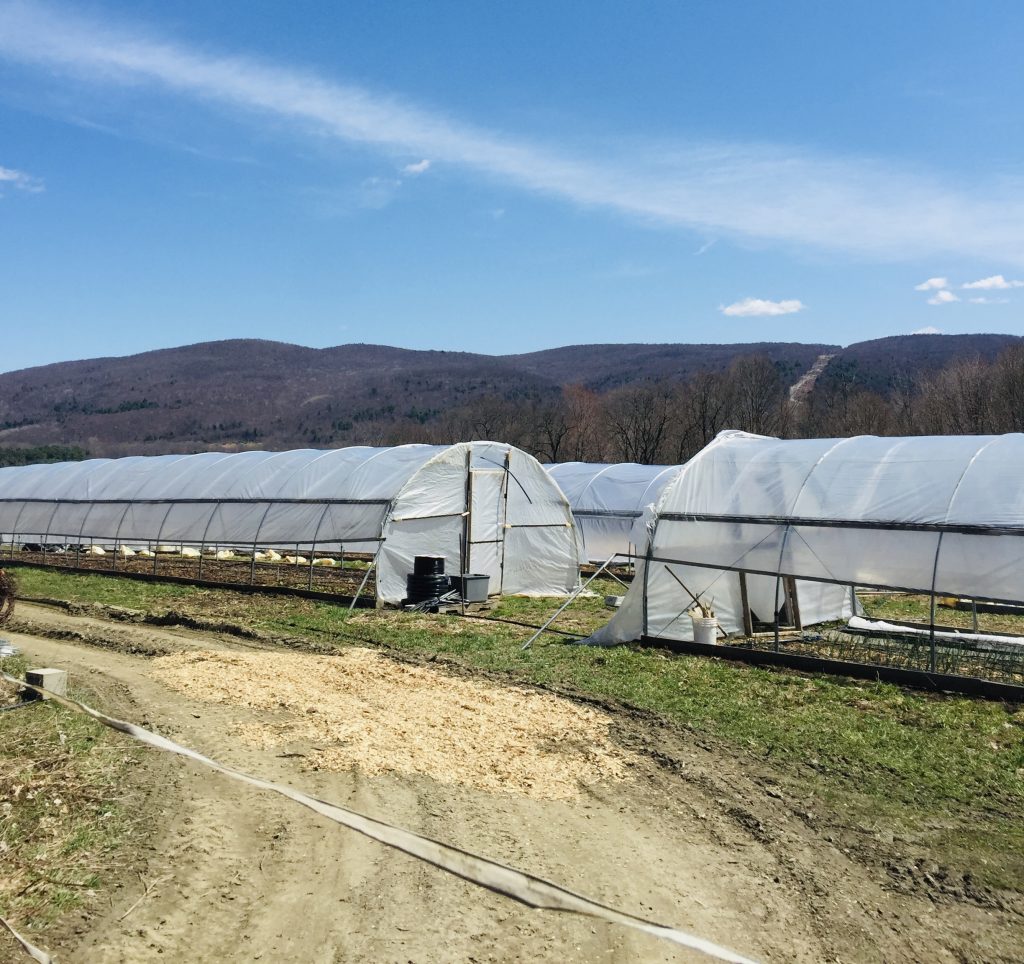 How the farm is pivoting during social distancing

Normally, Square Roots Farm sells its eggs and pastured beef and pork at Berkshire Grown’s winter markets in Great Barrington. Those are also good places to market the CSA shares, which include egg shares and, during the summer, chicken shares. This year they also plan to bring back their vegetable CSA after a two-year hiatus. They also have booths at the seasonal farmers’ markets in Pittsfield and North Adams. 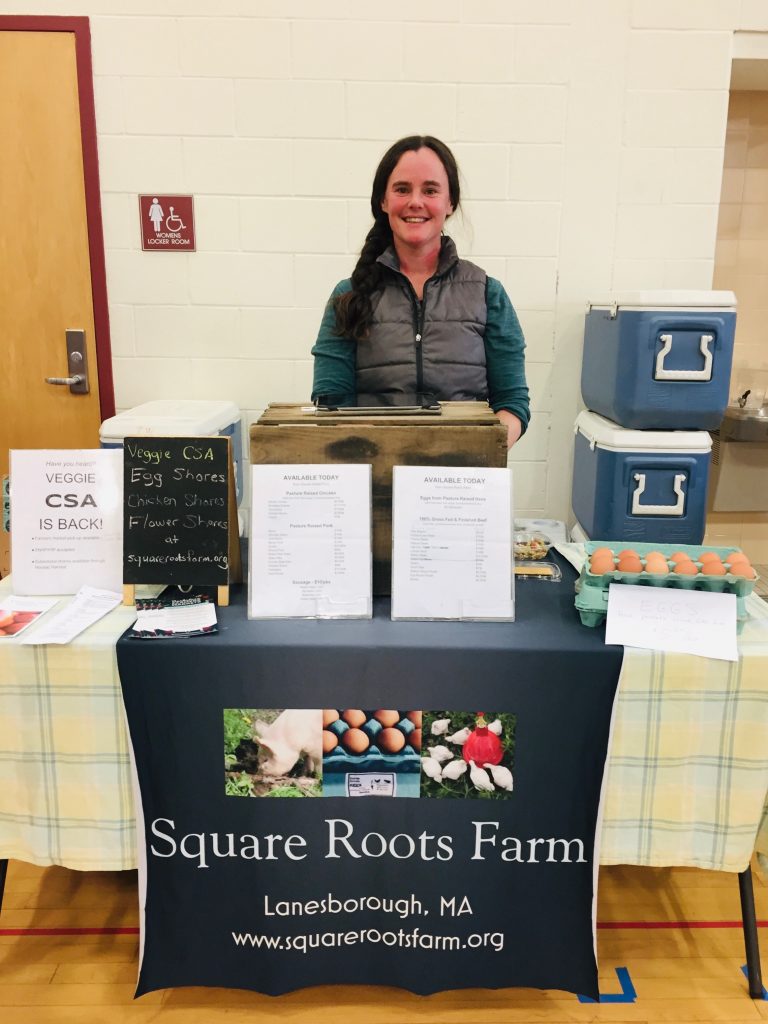 “When the first market got cancelled we anticipated that all the rest would be too.” So he and Ashley floated the idea of offering online ordering for pickup and delivery to other farms and purveyors at the market—namely Cricket Creek and Hosta Hill (also profiled in the cookbook) and a couple others. Those places brought their goods to Square Roots Farm, and then Michael and Ashley handled all the logistics.

“Fulfillment was time-consuming, to say the least. This past weekend we did 60 orders, 40-some for delivery and the rest for pickup,” Michael says. 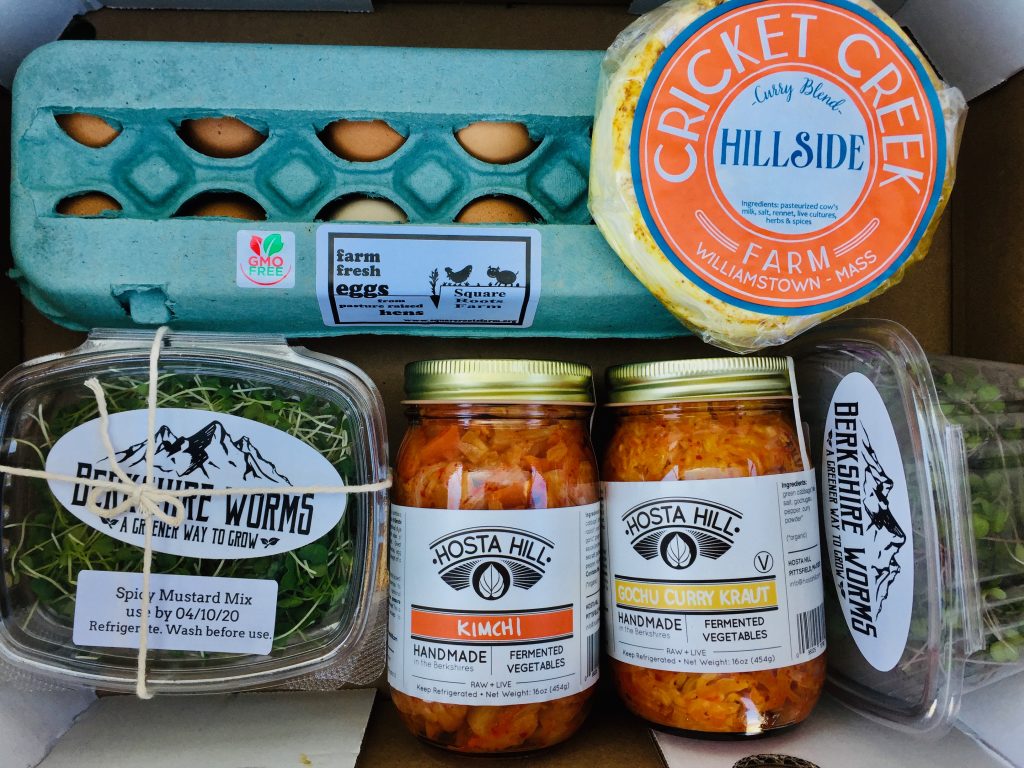 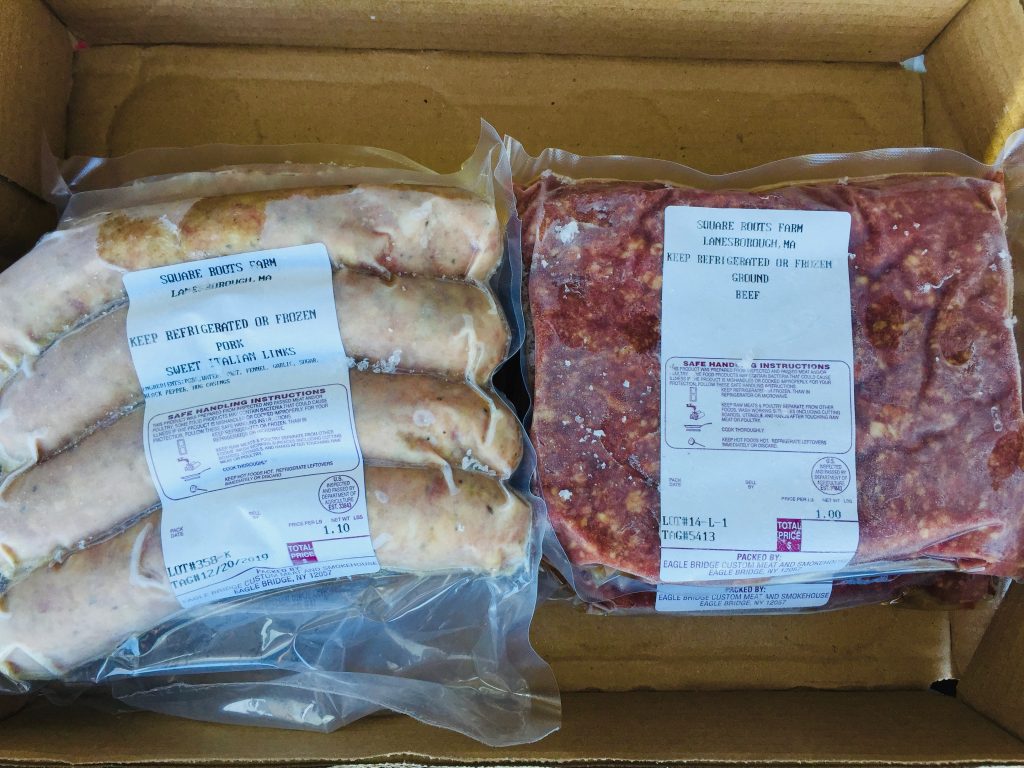 But now that Roots Rising has launched its own virtual market, Michael says his farm is just going to deliver its own products. (Pittsfield-based Roots Rising is a nonprofit organization whose mission is to empower youth and build community through food and farming; each Monday they take new orders for a range of products for that week.)

“We will keep on doing delivery but streamline it by going north one week and south the next,” Michael says. They’re also switching to Thursdays only rather than two days, as before.

And the farm is building a new and improved web store, which should be ready any day now—something Michael says will make it easier to take orders and do all the rest. “It was taking us a whole day of computer work between making the packing lists and going back and making the invoices for those 40 deliveries.”

For the time being, click here to place an order for their meats and eggs.

You can also purchase a gift card and sign up for their CSA.

Planning for an uncertain future

With three full-time employees this year, Michael says the farm is a little short on help. “We also have a guy who comes just to wash eggs a couple days a week, but he’s had to stay home with his daughter because she’s not in school. This is his first day back and we are glad to have him here as we have a lot of eggs to wash.” 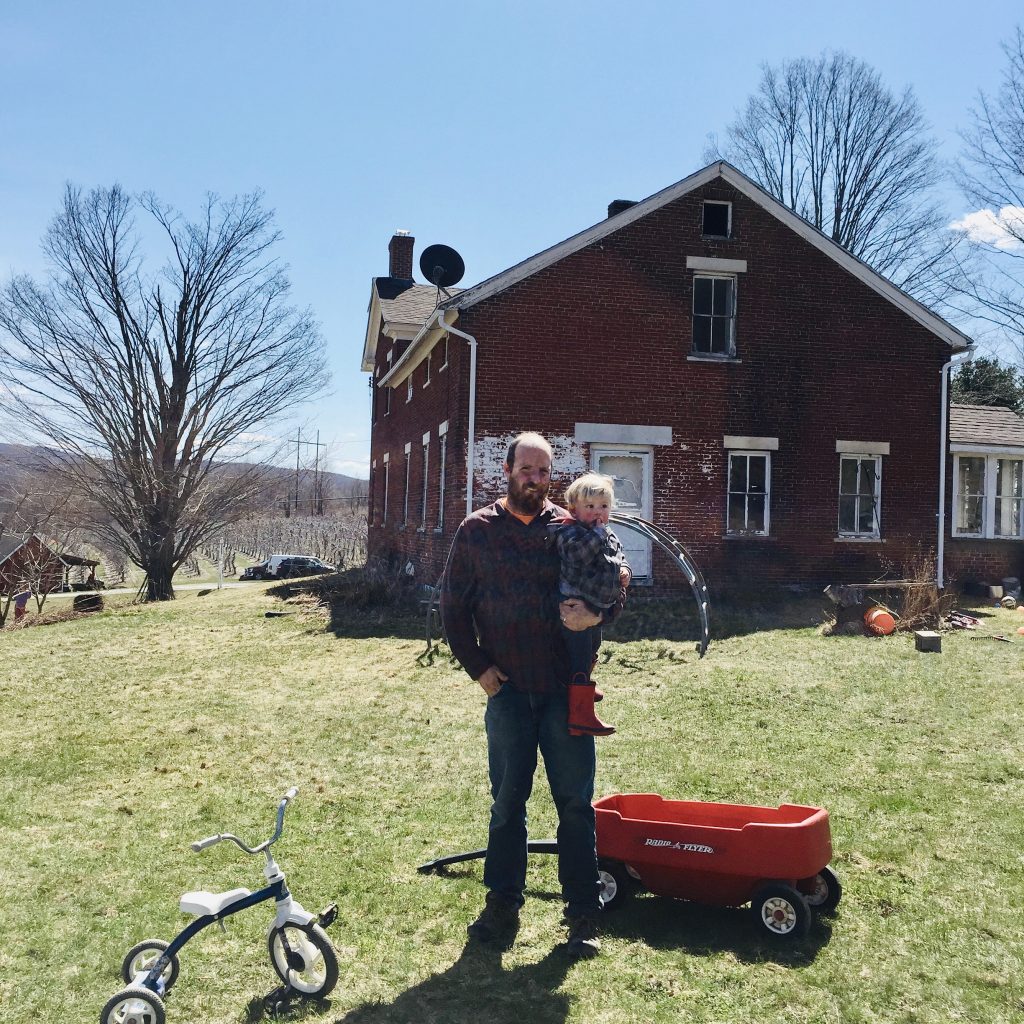 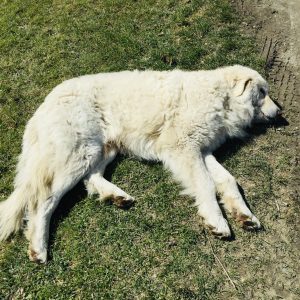 Plus in addition to running the farm they now have their own kids to look after. “Maggie was at school half days and Everett was at day care three days and with my mom the other two, but that can’t work anymore.”

(In fact, the family had been picking ramps all morning and plan to use the leaves for making pesto. “It’s still too early to pick the bulbs here.” Meanwhile, Yorick, a Maremma Sheepdog and the family watch dog, posed for the picture!)

And while they would usually plan to sell at the farmers’ markets in Pittsfield and North Adams during the summer, Michael questions whether they will be going back.

“There are other ways for people to get their food and for farmers to sell their food. We had been talking all winter about doing something different, either home deliveries or a buying club with a drop-off once a month to reach the people we weren’t reaching at the markets. We’re investing a bunch of money and time into our web store in making it streamlined and making it work. So we were thinking of it already.”

Here are some outtakes from The Berkshires Farm Table Cookbook; Rob took these photos of Square Root Farm during the summer season a couple years ago. 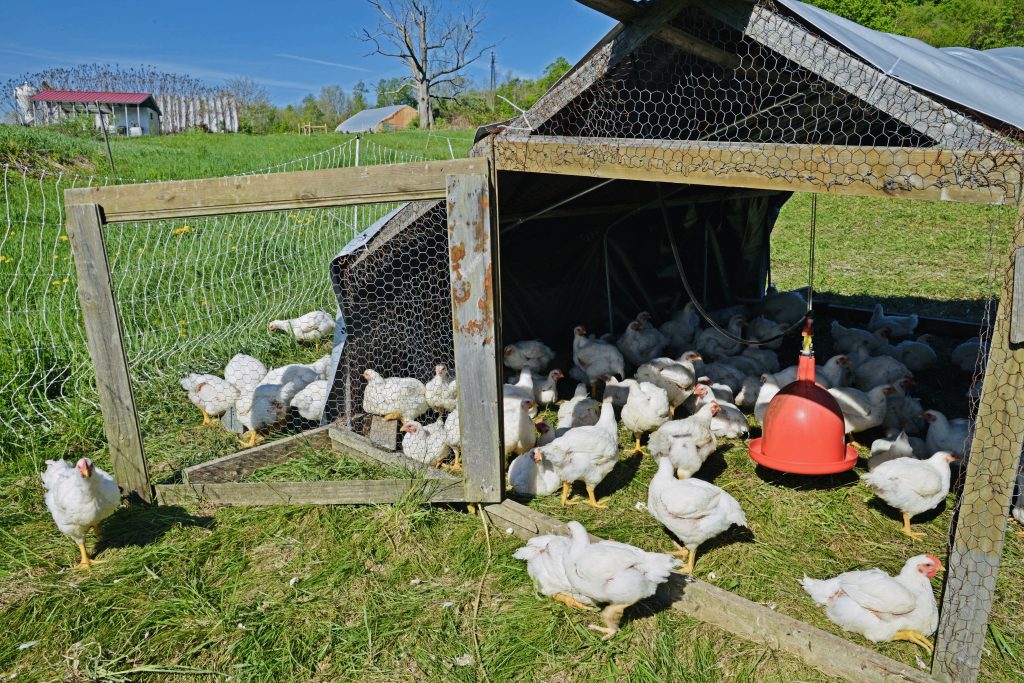 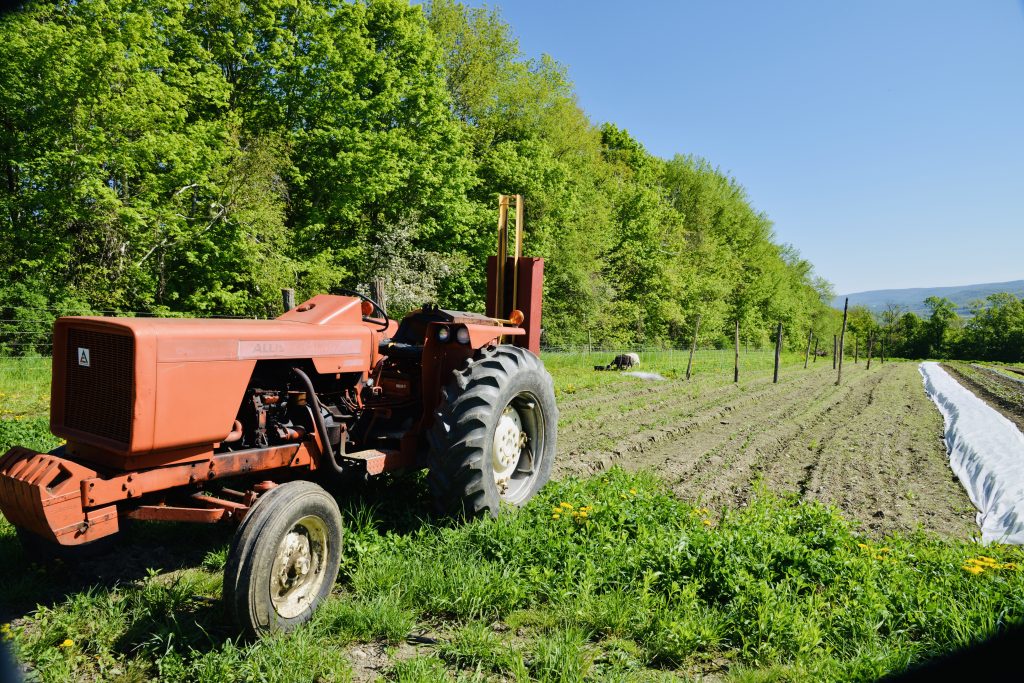