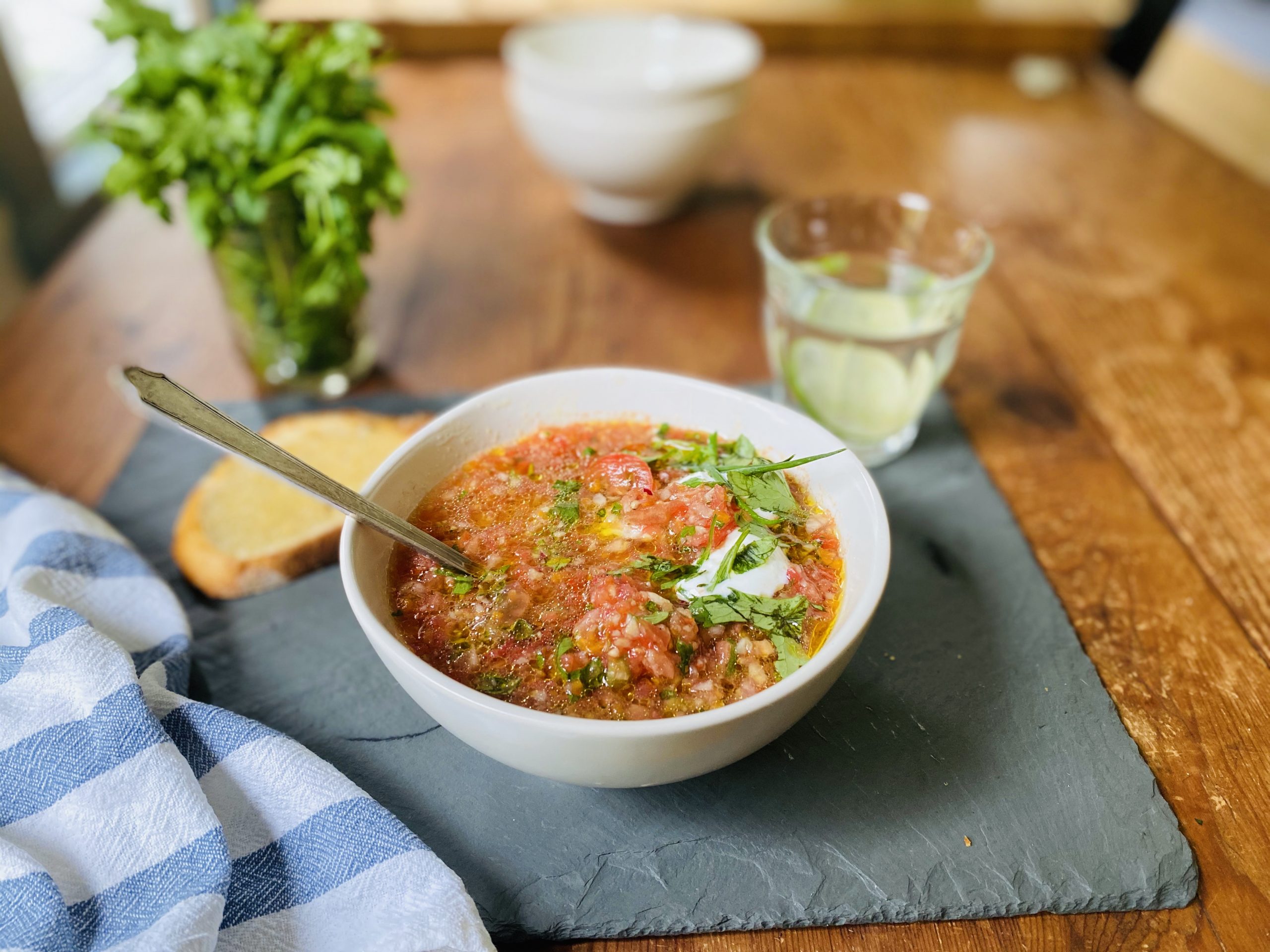 Now that tomatoes and cucumbers are showing up at the farmers’ markets (and our own gardens), we wanted to showcase those seasonal favorites in a zesty gazpacho recipe from The Berkshires Farm Table Cookbook (hint: it’s on page 58!). 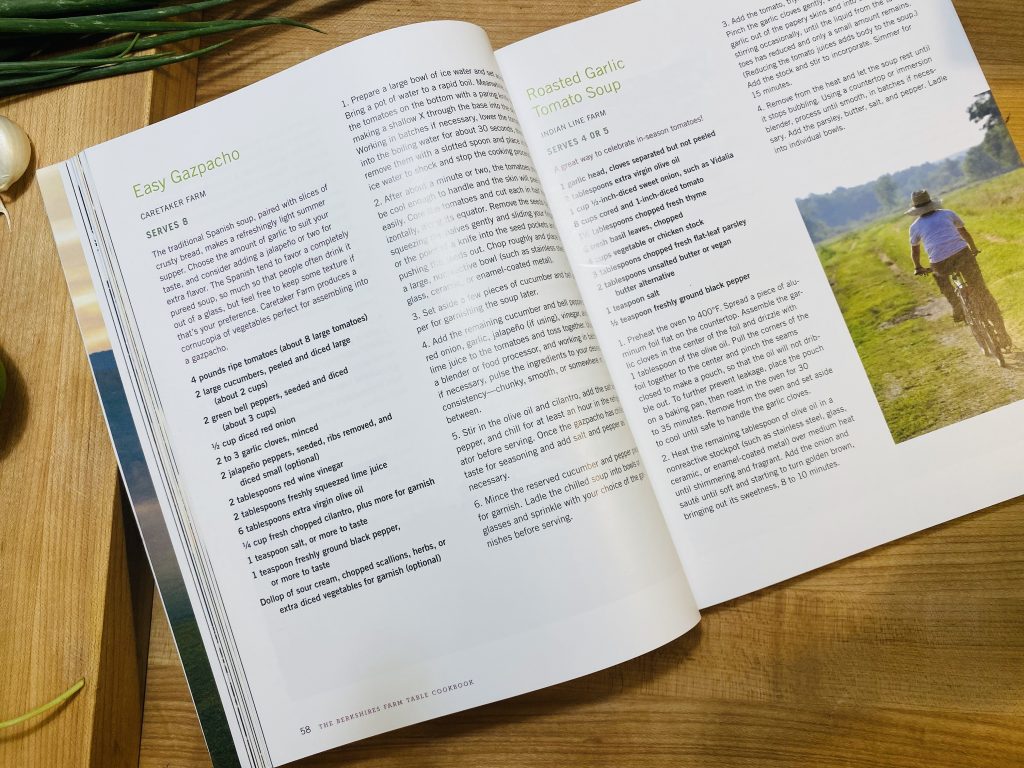 The gazpacho recipe, developed by our collaborator Brian Alberg (who just opened The Break Room at Greylock Works—worth a visit!), was inspired by the crops at Caretaker Farm in Williamstown, MA. The community-run farm grows over 175 varieties of 40 different crops grown each season, all following sustainable, regenerative farming methods.

We foraged for the soup’s copious produce at local farmer’s markets and farm stands—the gorgeous beefsteak tomatoes are from Indian Line Farm in Egremont, MA, the medley of smaller tomatoes from Woven Roots Farm in Tyringham, MA, and the cucumbers from Gaetano’s Organic Farm in our own town of Becket, MA. 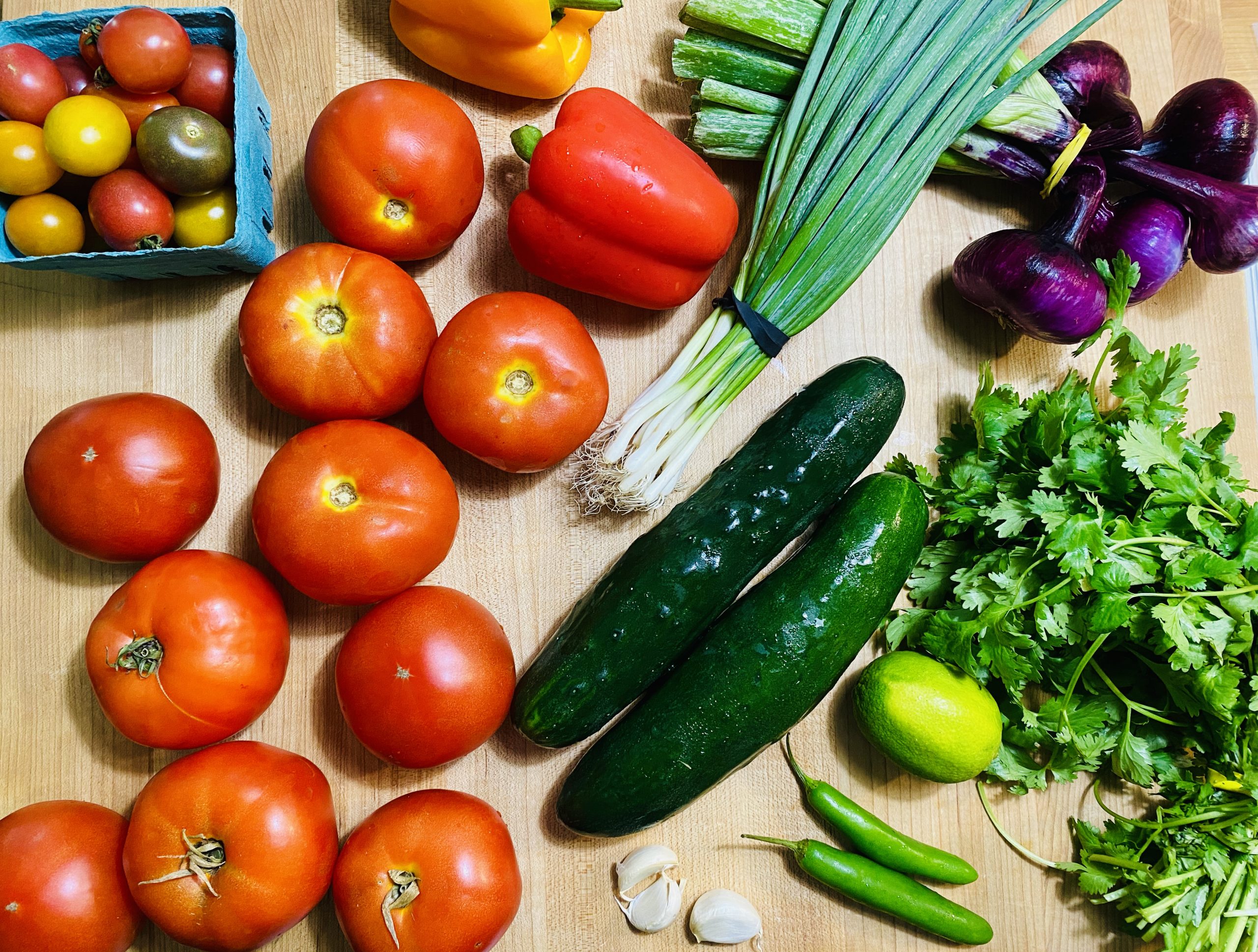 With such peak-of-season tomatoes in hand, we opted not to peel them as written in the original recipe. This also shortens the prep time and you end up with a completely no-cook meal. If you follow our lead, just core the tomatoes and roughly dice (squeezing out the seeds or not; we left them in).

But if you can manage to turn on the oven for a short spell, it’s worth brushing some rustic bread slices with olive oil and toasting until crunchy and sturdy enough to dunk into the soup. Or if the gazpacho is a precursor to grilled chicken or steak, you can toast the bread right on the grates.

The photos here show a chunky version of the recipe, which is our preference. We love the crunch of the vegetables and how you can taste each one in this amazing procession of tastes and textures. For a smoother rendition, just puree the ingredients until smooth—and then strain in a fine-mesh sieve for the silkiest result. This would be wonderful served in glasses, for sipping (as the Spaniards tend to do).

Garnishes are optional and open to interpretation. A dollop of sour cream lends welcome richness; stir in a little fresh lime juice for additional flavor and to help the sour cream blend more easily into the soup. More cilantro is always a good thing in our book. We found there was enough allium flavor from the garlic and red onion so we just snipped the dark-green tips of the scallions.

Be sure to allow the gazpacho to sufficiently chill before serving, to allow the flavors to mingle and the soup to reach a refreshing temperature. The colder the better on a hot summer evening.

The soup would pair nicely with rosé or sparkling wine but we happened to have some American Lager from Big Elm Brewery in Sheffield, MA in the refrigerator so that was serendipitous and splendid.

And we were happy to be able to enjoy a bowl of gazpacho for lunch the next day—hard to say but we think it may have tasted even better.

The traditional Spanish soup, paired with slices of crusty bread, makes a refreshingly light summer supper. Choose the amount of garlic to suit your taste, and consider adding a jalapeño or two for extra flavor. The Spanish tend to favor a completely pureed soup, so much so that people often drink it out of a glass, but feel free to keep some texture if that’s your preference. Caretaker Farm produces a cornucopia of vegetables perfect for assembling into gazpacho.

1 teaspoon salt, or more to taste

1. Prepare a large bowl of ice water and set aside. Bring a pot of water to a rapid boil. Meanwhile, score the tomatoes on the bottom with a paring knife by making a shallow X through the base into the skin. Working in batches if necessary, lower the tomatoes into the boiling water for about 30 seconds, then remove them with a slotted spoon and place in the ice water to shock and stop the cooking process.

2. After about a minute or two, the tomatoes should be cool enough to handle and the skin will peel off easily. Core the tomatoes and cut each in half horizontally, through its equator. Remove the seeds by squeezing the halves gently and sliding your fingers or the point of a knife into the seed pockets and pushing the seeds out. Chop roughly and place in a large nonreactive bowl (such as stainless steel, glass, ceramic, or enamel-coated metal).

3. Set aside a few pieces of cucumber and bell pepper for garnishing the soup later. 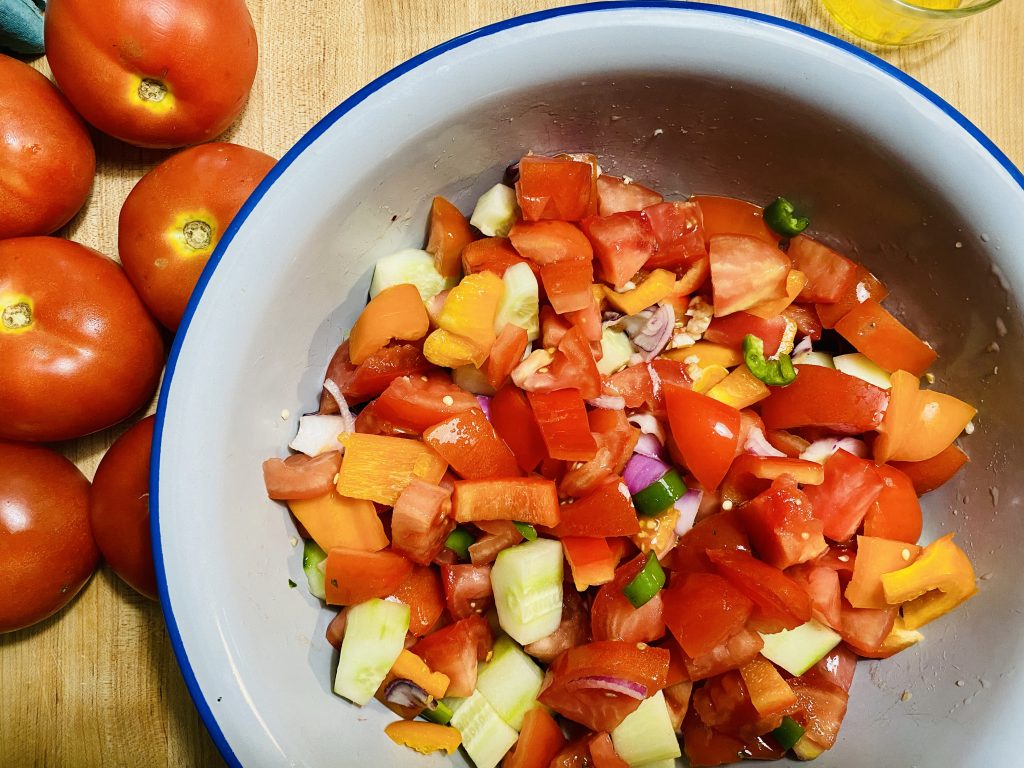 4. Add the remaining cucumber and bell pepper, red onion, garlic, jalapeño (if using), vinegar, and lime juice to the tomatoes and toss together. Using a blender or food processor, and working in batches if necessary, pulse the ingredients to your desired consistency—chunky, smooth, or somewhere in between.

5. Stir in the olive oil and cilantro, add the salt and pepper, and chill for at least an hour in the refrigerator before serving. Once the gazpacho has chilled, taste for seasoning and add salt and pepper as necessary. 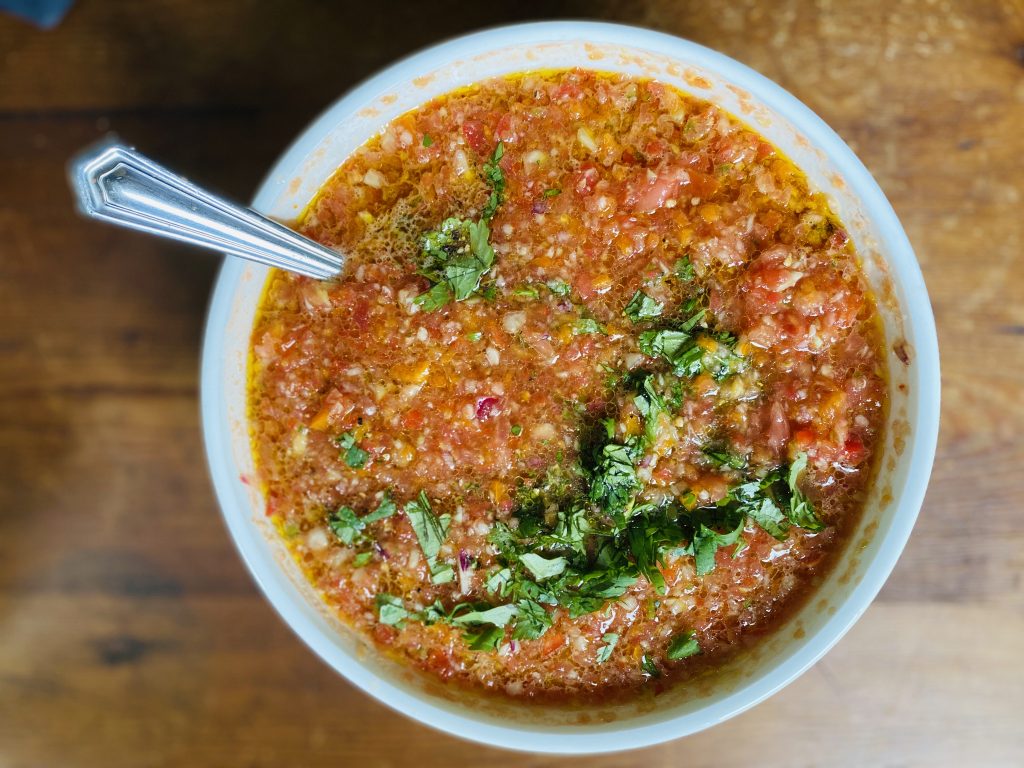 6. Mince the reserved cucumber and bell pepper pieces for garnish. Ladle the chilled soup into bowls or glasses and sprinkle with your choice of the garnishes before serving. 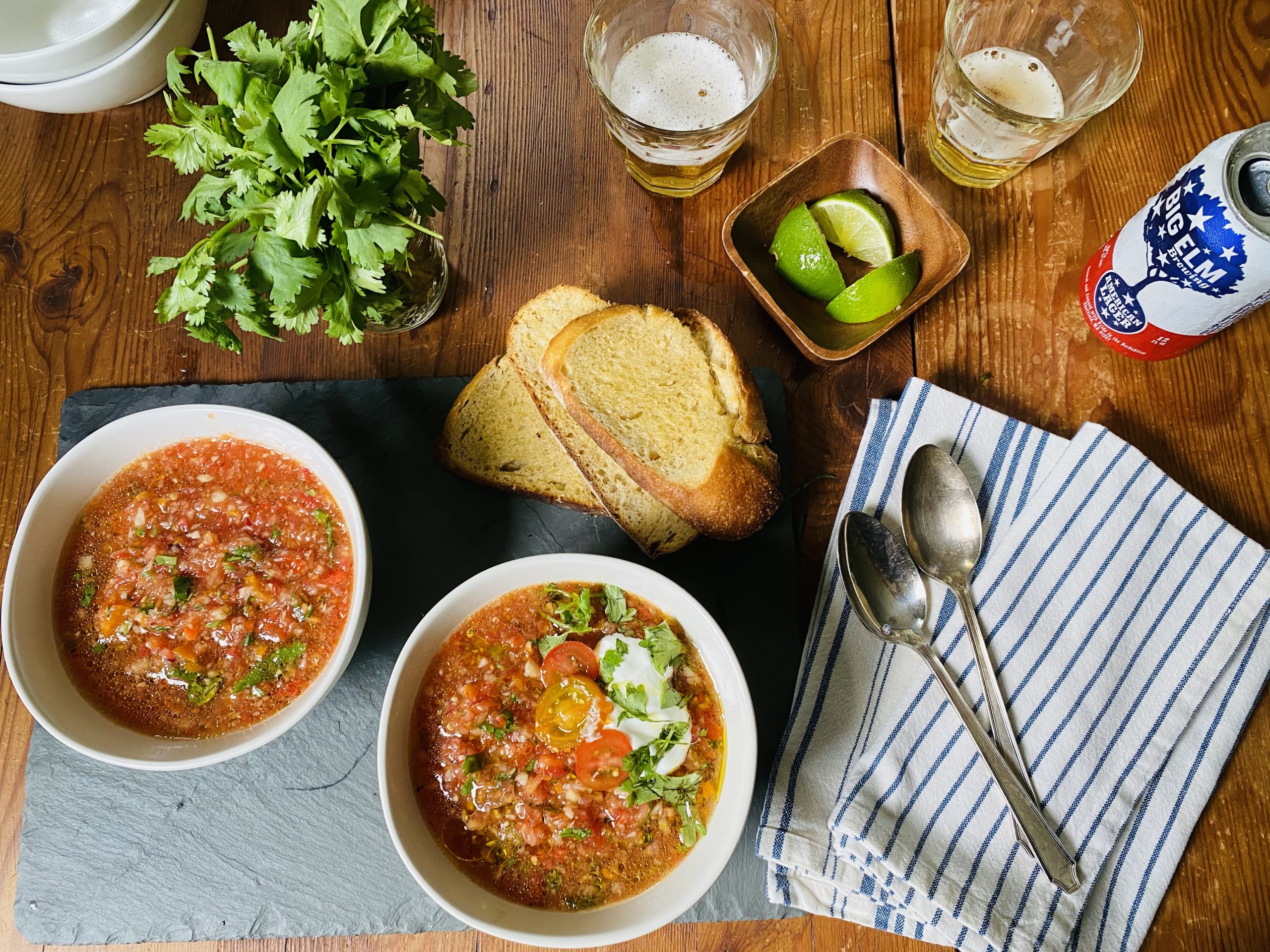