This year Hanukkah begins at sundown on Thursday, December 10 and continues through sundown on Friday, December 18. We’ve culled some recipes from The Berkshires Farm Table Cookbook to help you celebrate the Festival of Lights with something new to complement the tried-and-true.

Take latkes, a Hanukkah staple—and a traditional symbol of the miracle of only one vial of oil that illuminated the Holy Temple’s menorah for eight full days. There’s nothing wrong with the classic potato pancake, of course, but why not incorporate other seasonal vegetables into the mix? Adding red beets to a blend of potato, carrot, and celery root results in a latke like no other. They bring earthy flavor and a vibrant color to the ceremonial table (or to a weekend brunch). Rutabaga is another unexpected ingredient, used here in combination with carrots, winter greens, and red onion. Both latke variations taste great with applesauce (we’ve provided a recipe for that below, too!) or sour cream, but you can also venture into new territory with novel toppings like pear sauce (swapping pears for apples), pesto, ricotta, mascarpone, crème fraîche, or a dollop of pepper jelly, for spicy heat. Now is also a good time to raid your pantry for any jams and fruit butters you may have put up from the summer.

We encourage you to make them all as a way to honor these hardworking folks and brighten your holiday menus. 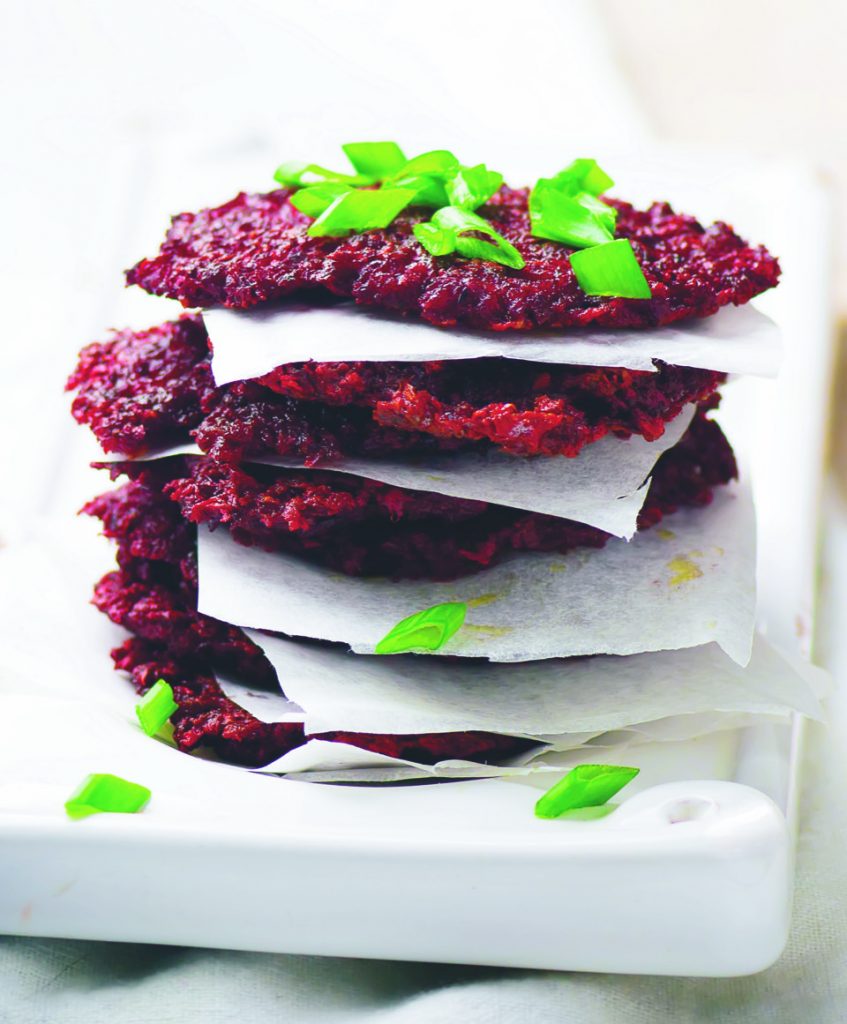 These beet pancakes are also great for using up a variety of other root vegetables. Using a food processor will make quick work of the shredding aspect of the preparation. With a nice browned crust, the latkes are delicious served with sour cream and chives, and offer a good alternative to hash browns at breakfast or brunch.

1 cup peeled and shredded carrots (about 6 ounces, 2 to 3 medium carrots)

¼ cup rye or whole wheat flour, or more as needed to hold the raw latkes together

2 tablespoons neutral oil, such as canola, plus more as needed, for frying

Sour cream and chopped chives, or applesauce for garnish (optional)

1. Prepare a plate with layers of paper towels to drain the pancakes.

2. Place the scallions, thyme, salt, beets, carrots, celery root, and potatoes in a large bowl and mix well. Use a paper towel to gently squeeze out any excess moisture. Scatter the flour on top of the shredded vegetables and mix until well incorporated.

3. Combine the cheese and egg in a small bowl. Fold into the vegetable mixture until well coated.

4. Heat the oil in a heavy-​bottomed skillet over medium heat until shimmering. Working in batches so as not to crowd the pancakes, use a ¼-​cup measure to scoop the vegetable mixture into the skillet. Flatten the mixture gently, using the back of the measuring cup or a spatula, making sure the pancakes do not touch each other. Fry for 4 to 5 minutes on one side, until browned and crisp, and then flip to fry the other side for the same amount of time, or until browned and crisp. Transfer the latkes to the lined plate to drain. Repeat until the entire vegetable mixture has been used. If more oil is needed for frying subsequent batches, add as necessary.

5. Serve the beet latkes warm with sour cream and chives or with applesauce as a garnish.

Rutabaga, the zippier relative of the turnip, is similarly overlooked as a drab winter storage crop vegetable. These simple latkes help the humble rutabaga make a star appearance over the more traditional potato pancake. Because they are dense, using a food processor to shred the vegetables is much easier than doing it by hand. These are great paired with applesauce—see the recipe below.

½ teaspoon salt, or more to taste

¼ cup all-purpose flour, or more as needed to hold raw latkes together

6 tablespoons neutral oil, such as canola, or more if necessary for frying

1. Prepare a plate with layers of paper towels to drain the pancakes.

2. Place the rutabaga, carrots, red onion, and greens in a large bowl and mix well.

4. Heat 2 tablespoons of the oil in a heavy-bottomed skillet over medium heat until shimmering. Working in batches so as not to crowd the pancakes, use a ¼-cup measure to scoop the vegetable mixture into the skillet. Flatten the mixture gently, using the back of the measuring cup or a spatula, making sure the pancakes do not touch each other. Cook until golden brown on one side, about 4 minutes, then turn and brown for about 4 minutes on the other side. Transfer the latkes to the lined plate to drain. Cook the remaining batter, adding 1 tablespoon of oil or more, if necessary, between each batch.

5. Serve warm and top with a spoonful of sour cream, ricotta, pesto, or applesauce.

Chunky Homemade Applesauce (to top your latkes!)
Makes 4½ cups; serves many as a latke topping

Inspired by Riiska Brook Orchard (read more about them here)

1 to 2 tablespoons sugar, or to taste (optional)

1. Peel and core the apples. Cut into quarters, then into eighths.

2. Put the apples in a large Dutch oven or saucepan and pour in the cider. Add the cinnamon, nutmeg, sugar, and vanilla.

3. Cover and cook over medium-low heat for 10 minutes, mix, and then cook for another 10 minutes, or until the apples are soft. Remove from the heat and let cool.

4. Using an immersion blender, blend until smooth but with some chunks remaining, or to your desired texture. 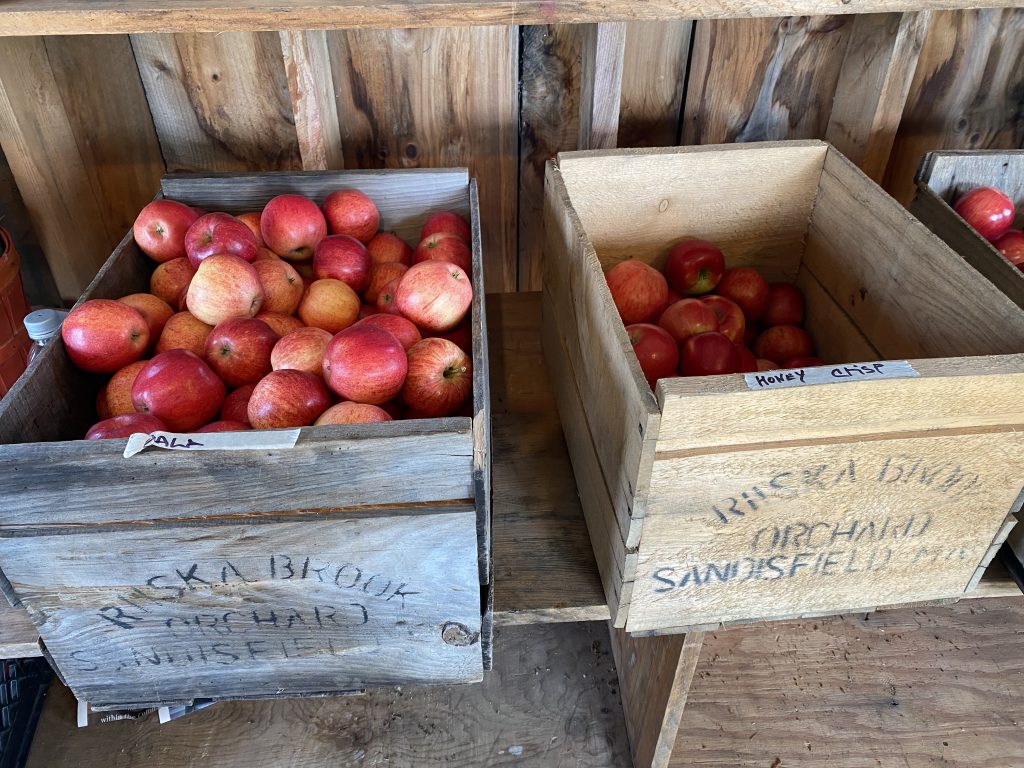 We use cookies to enhance your experience on our site. By browsing this site, you agree to our use of cookies.Ok