In the final countdown to the May 19 launch of The Berkshires Farm Table Cookbook, we will be sharing more sneak peek recipes from the book.

Now also seems a fitting time to introduce Chef Brian Alberg, who developed the recipes for the cookbook, taking inspiration from the products and stories of the farms we profiled in the book.

Brian’s background is impressive: As vice president of culinary development (and former executive chef) of Main Street Hospitality Group, he oversees the restaurants at MSHG’s properties, including The Red Lion Inn, in Stockbridge; Hotel on North, in Pittsfield; and catering at Studio 9, a private event space at The Porches Inn, in North Adams, MA. Brian is also co-owner of the Tap House at Shaker Mill, in West Stockbridge, MA.

So if anyone knows his way around the culinary scene in the Berkshires, it’s Brian. He has also been an outspoken proponent of procuring food from local farms and purveyors, putting these sources on the menu for diners to discover.

His latest venture for MSHG, slated to open July 1, will be the Break Room at Greylock Works, also in North Adams. Known as gWORKS, this innovative incubator-type campus embodies the mission of our book in supporting local food producers and farmers as well as broadening awareness of a healthy local food system. The Break Room will showcase resident food products in a restaurant that will be open to the public. (Read more about this enterprise here.)

When we approached Brian about our ideas for the book, he had been thinking of a cookbook with a similar theme and graciously agreed to join us on our journey. We were ecstatic. Actually, we three had serendipitously bonded a number of years before as fellow food entrepreneurs and supporters of local food. As Brian put it,”We are like-minded in the farm-to-table movement.”

Pivoting during the disruption

As for how he is managing during the current sheltering in place, Brian told us they’ve adapted to the take-out scene and are doing okay. The Red Lion Inn has a limited menu and the Tap House has been active, even providing homemade donuts on Sunday mornings. (He had been up until 2 am making those when we spoke today via email). 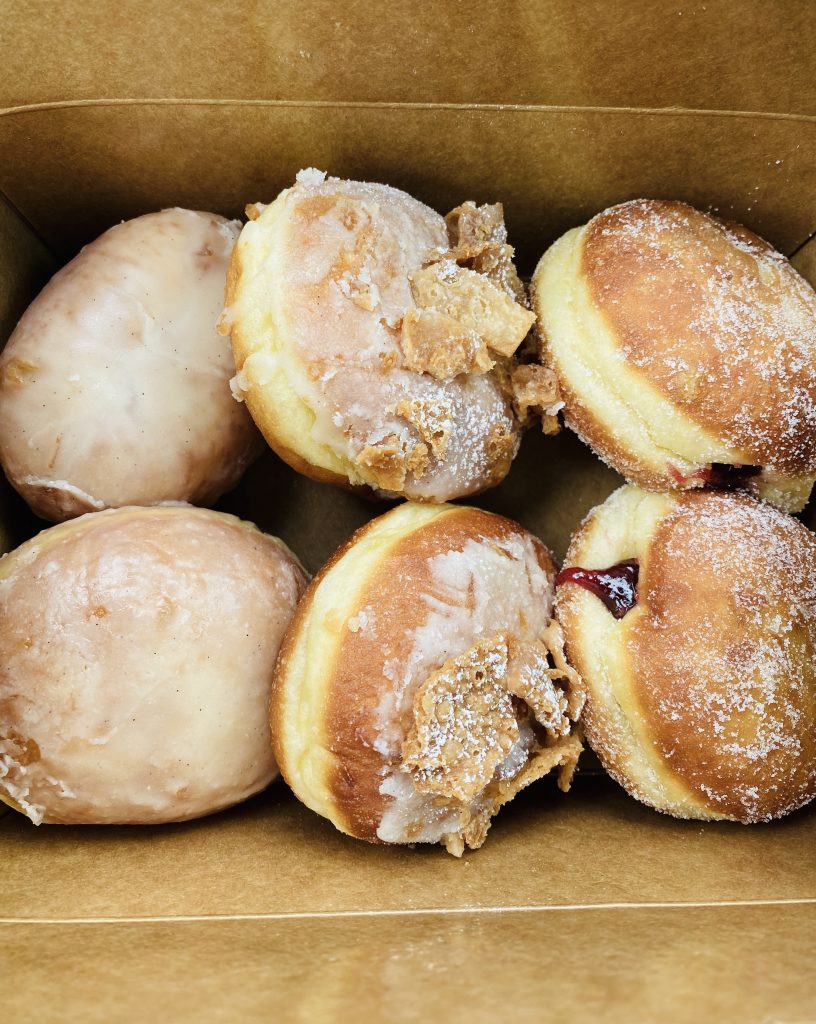 Brian also plans to offer pop-ups at the Tap House every other week, starting with a recent clam-shack menu. “That was incredible. We did lobster rolls and whole belly clams and it sold out quickly. We are thinking maybe New Orleans style food for the next one,” he says.

The regular take-out menu features a family meal for two or four people, something Brian says has been the focus ever since he pivoted to online ordering and has proven to be very popular. It’s also a good value: A meal for four includes a salad, entree, side dishes, and dessert—all for $50. “When the pandemic broke out I wanted to sustain my business, keep a couple people employed, and feed the local community.”

That said, he still has to keep an eye on the bottom line, and has been adding a la carte options to the regular offerings. “The family meal brings people in the door and it helps them and us, but selling a $29 steak helps out a little bit more,” he says.

A few notes about the recipe

We chose to spotlight the following recipe from the book not just because it is from Brian himself but also as it features sugar snap peas, which are a harbinger of spring and will soon be in plentiful supply from local farms and in farm-to-fork stores like Guido’s, Wild Oats, and Berkshire Food Co-op.

When possible in the book, we attempted to provide tips on how to prepare a vegetarian version of the recipes. For this one, you can swap out the pancetta with mushrooms, which is the version we made below, using a combination of shiitake, maitake (aka hen of the woods), and cremini for deep flavor. It’s as rich as the original and sure to please even meat-lovers (including one member of our own family).

We found ourselves with plenty of white and yellow storage onions, having stocked up, but without the one-half red onion called for. In the interest of limiting trips to the grocery store, we used what he had and are happy to report that any difference from the original was undetectable.

And even though the recipe calls for just half a box of pasta, it stretches to make more servings than you might think. After enjoying it for dinner, we had enough left over for lunch the next day—and it was still delicious. Allow it to come to room temperature before gently rewarming over low heat, covered.

Final note and good news: Brian is putting this dish on his take-out menu (it will be updated in the next couple days, so keep checking). So you can either make it yourself or order in for pickup—or both!

“The Bildners put their heart and soul into this book, and I’d like to spread the word to the community, who have been so supportive,” Brian says. 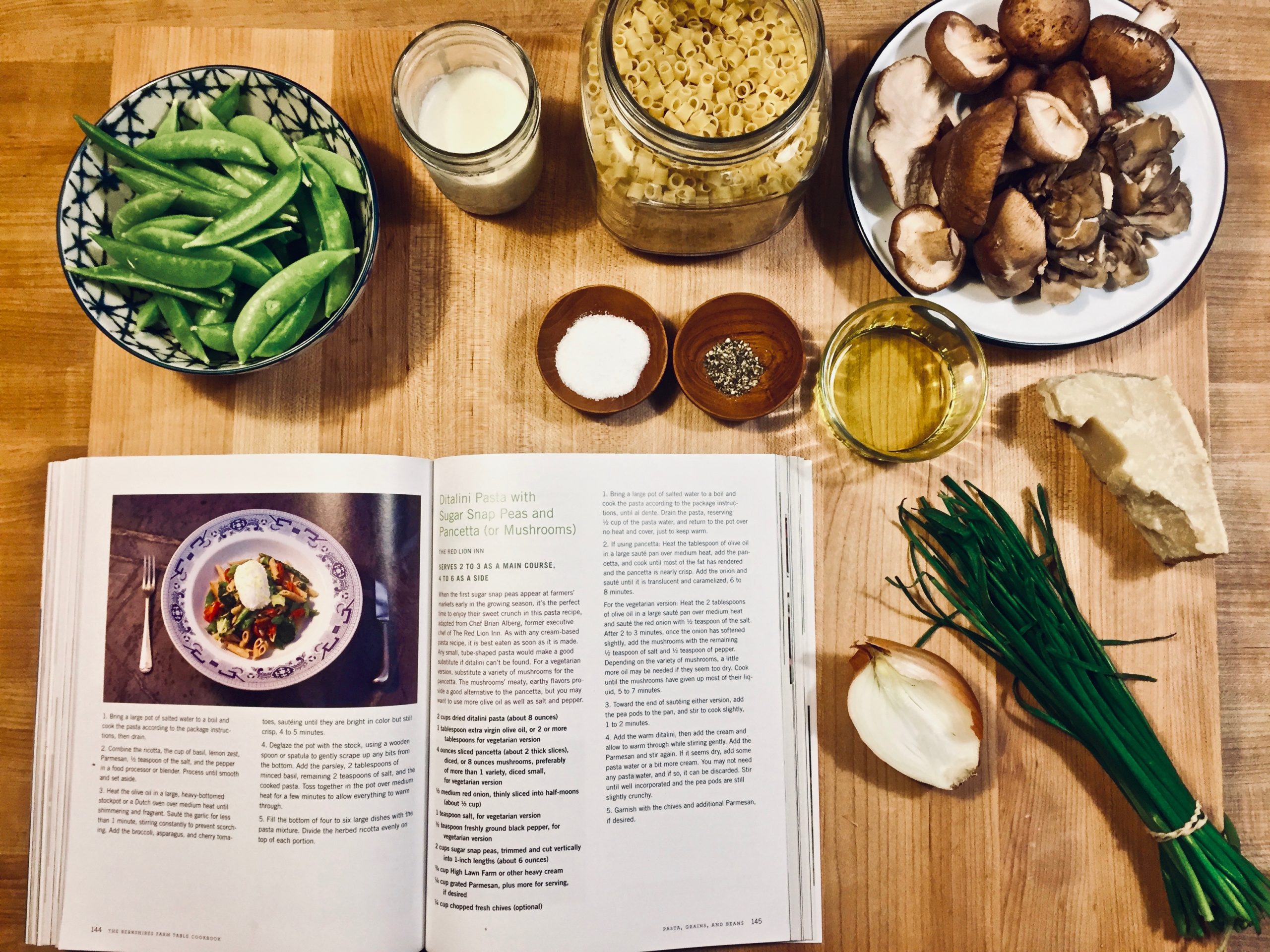 Ditalini Pasta with Sugar Snap Peas with Pancetta (or Mushrooms)
Serves 2 to 3 as a main course, 4 to 6 as a side

When the first sugar snap peas appear at farmers’ markets early in the growing season, it’s the perfect time to enjoy their sweet crunch in this pasta recipe. As with any cream-based pasta recipe, it is best eaten as soon as it is made. Any small, tube-shaped pasta would make a good substitute if ditalini can’t be found. For a vegetarian version, you can substitute a variety of mushrooms for the pancetta. The mushrooms’ meaty, earthy flavor provide a good alternative to the pancetta, but you may want to use more olive oil as well as salt and pepper.

Inspired by The Red Lion Inn

4 ounces sliced pancetta (about 2 thick slices), diced (or 8 ounces mushrooms, preferably of more than one variety, diced small, for the vegetarian version)

½ medium red onion, thinly sliced into half moons (about ½ cup)

¾ cup High Lawn or other heavy cream, plus more as needed

¼ cup grated Parmesan, plus more for serving, if desired

1. Bring a large pot of salted water to a boil and cook the pasta according to the package instructions, until al dente. Drain the pasta, reserving ½ cup of the pasta water, and return to the pot over no heat and cover, just to keep warm.

2. If using pancetta: Heat 1 tablespoon of olive oil in a large sauté pan over medium heat; add the pancetta, and cook until most of the fat has rendered and the pancetta is nearly crisp. Add the onion, and sauté until it is translucent and caramelized, 6 to 8 minutes.

For the vegetarian version: Heat 2 tablespoons of olive oil in a large sauté pan over medium heat and sauté the onion with ½ teaspoon of the salt. After  2 to 3 minutes, once the onion has softened slightly, add the mushrooms with the remaining ½ teaspoon salt and ½ teaspoon of pepper. Depending on the variety of mushrooms, a little more oil may be needed if they seem too dry. Cook until the mushrooms have given up most of their liquid, 5 to 7 minutes. 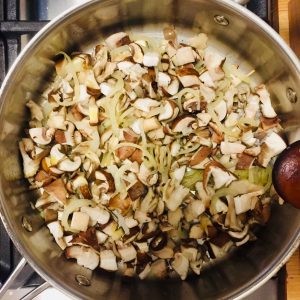 3. Toward the end of sautéing either version, add the pea pods to the pan, and stir to cook slightly, 1 to 2 minutes. 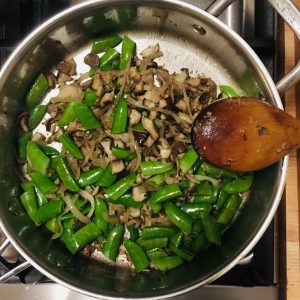 4. Add the warm ditalini to the pan, then add the cream and allow to warm through while stirring gently. Add the Parmesan and stir again. If it seems dry, add some of the reserved pasta water or a bit more cream. You may not need any pasta water, and if so, it can be discarded. Stir until well incorporated and the pea pods are still slightly crunchy. 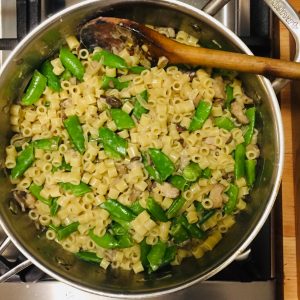 5. Garnish with chives and additional Parmesan, if desired. 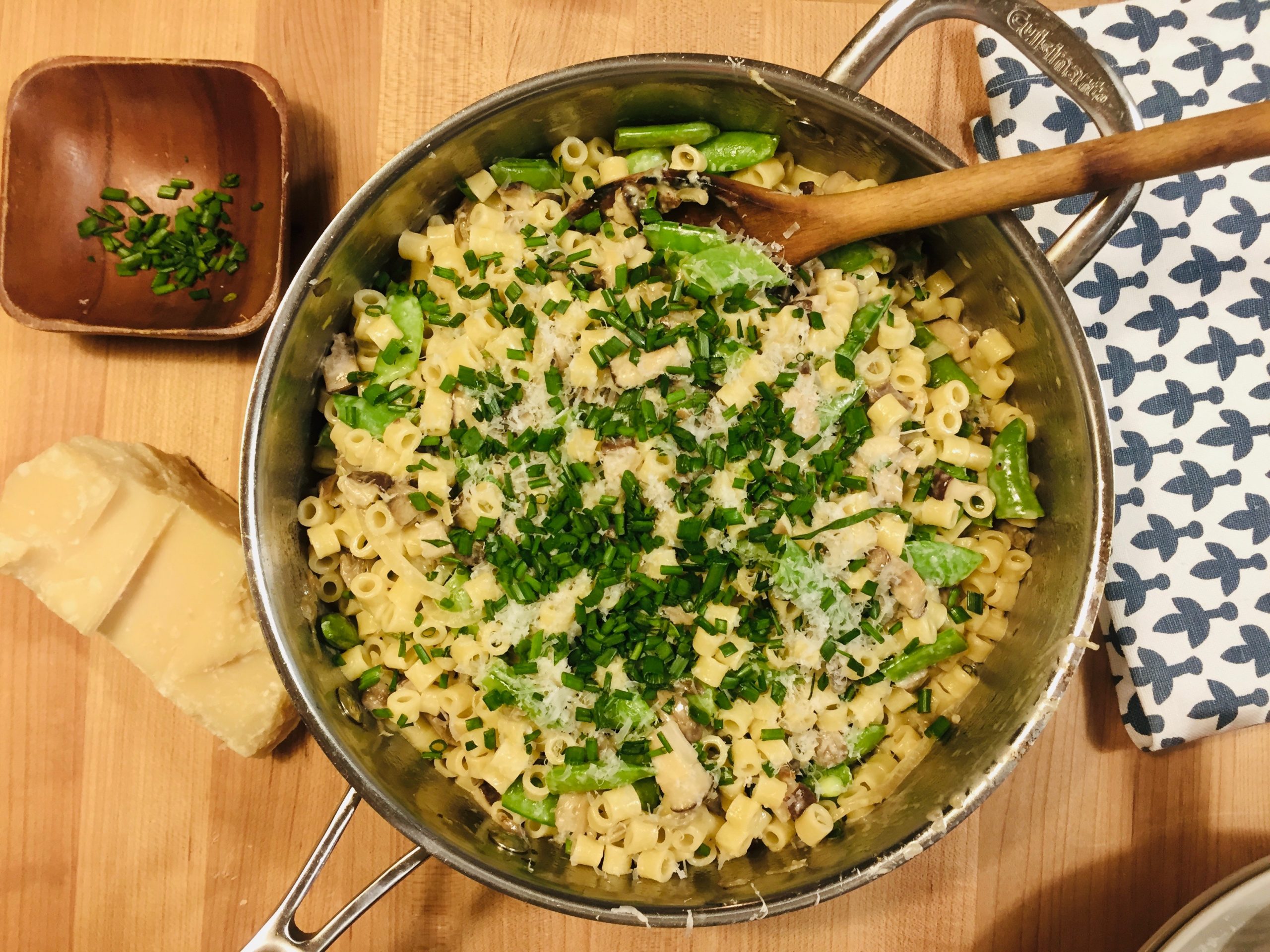