We are thrilled to share a sneak peek of a recipe from The Berkshires Farm Table Cookbook, due out May 19!

These leek tarts were inspired by the ever-popular Monterey Chèvre from Rawson Brook Farm, one of the farms profiled in the cookbook. In addition to the original recipe, guest blogger and recipe tester Elizabeth Baer of CulinUrsa offers her own adaptation using  what she had on hand (one less trip to the supermarket!).

Cooking During a Pandemic
By Elizabeth Baer

As many of you may be doing during sheltering-in-place, my husband Hank and I had virtual drinks on the dock the other night with some old friends.

Basically we were trying to replicate—on Zoom, from our home in Lenox—our real-time ritual at our seasonal rental in Maine. (It’s on the same lake where Hank attended summer camp, and we can hear the bugle calls!) It was also a chance to connect with folks who spend summers in the same area of the Pine Tree State.

I wanted the occasion to truly feel like cocktail hour, with an hors d’oeuvre that Hank and I could nibble on while we visited. Having tested all recipes for The Berkshire Farm Table Cookbook, I turned to a particular favorite—Leek Tarts with Chèvre—only I had no leeks! I managed to find everything else though. I even had some chèvre in the freezer that I had purchased in the fall. (In case you don’t know, chèvre keeps really well in the freezer.) But no leeks.

Now that we are all attempting to minimize trips to the supermarket, I was not about to go out for just one ingredient. Our pantry and refrigerator and freezer were well stocked. So I started rummaging to find something else that might work.

Adapting recipes to use what’s on hand is something we are also doing more of these days. And guess what: Practically every recipe is open to improvisation. It’s a useful skill to develop.

As I was already incorporating a taste of the Berkshires by using Rawson Brook Farm’s Monterey Chèvre (the inspiration for the recipe), I thought: Why not add a taste of Maine with Stonewall Kitchen’s Maple Bacon Onion Jam? I had an open jar in the refrigerator, and it’s a favorite of our virtual guests. Plus Elisa, Rob, and I are slated to do two demo classes of recipes from The Berkshire Farm Table Cookbook at the Stonewall Kitchen Cooking School in July (understandably in limbo as of this writing). But we do have this lovely connection to Stonewall Kitchen and it felt natural to use one of its products.

For what it’s worth, I love coming up with substitutions like this, as well as ways to use leftovers. Check out my blog for more ways to do just that.

Note you should absolutely make the original version, included here, if and when you have a bunch of leeks from a trip to the farm stand or the occasional grocery run.

Though fancy enough for “entertaining,” these mini tarts are easy to prepare in muffin tins and can be eaten warm or at room temperature. You can also freeze any you don’t eat right away, so it’s worth doubling the recipe and keeping half for later.

As for the piecrust, you can follow the recipe from the book (also provided below) or use a quality store-bought crust in the freezer section. But it’s well worth making your own—especially now that you (like seemingly everyone) is spending plenty of time in the kitchen. Know that pie dough keeps well when shaped into a disk, wrapped well in plastic wrap, and stored in a sealable freezer bag. Let thaw overnight in the refrigerator before using.

With a steady supply of pie dough, you’ll be that much closer to having these treats—and other tarts, savory and sweet—in the oven and on the table.

Leek Tarts with Chèvre
Serves 4 to 6

These sturdy little tarts can be served warm or at room temperature, as appetizers at a summer party, or tucked into a picnic basket or school lunchbox in the fall. Small enough to be eaten out of hand, they are equally elegant on a plate for brunch. They also freeze well in zippered plastic freezer bags with most of the air pressed out.

Flour, for dusting (all-purpose is fine)

1. Preheat the oven to 400ºF. Set a nonstick 12-well nonstick muffin tin in the center of a rimmed half sheet pan so that any overflow is contained.

2. On a lightly floured surface, roll out the piecrust to 1/16-inch thickness. Using a large biscuit cutter or the lip of a 4½-inch diameter bowl and the tip of a sharp knife, cut circles of dough. Reroll the scraps and cut out the remains of the dough to make up 12 circles total. Press the dough circles gently into the muffin wells, smoothing out any wrinkles and flattening the dough against the bottom and sides. The bottom and sides of a shot glass work well here. Place the muffin tin in the refrigerator to chill the dough while working on the filling. 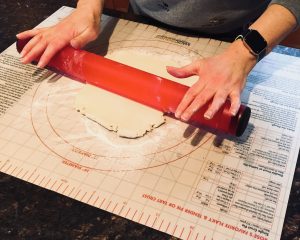 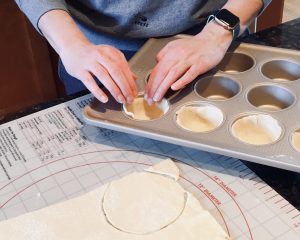 3. Discard the darkest green, thickest portions of the leeks and keep the lighter green and white parts. Slice the leeks lengthwise through the root and wash the leek halves carefully in cold water, swishing to be sure to remove any grit hiding between the layers. Slice the leeks thinly into half-moons and discard the root end.

4. Melt the butter in a large skillet over medium heat. Add the leeks and gently sauté for 20 minutes, or until soft and slightly caramelized. Remove from the heat and allow to cool slightly.

5. Mix together the crumbled chèvre, eggs, milk, thyme, salt, and pepper in a large bowl.

6. Remove the muffin tin from the refrigerator and measure 2 mounded tablespoons of leeks into each tart, evenly distributing any remaining leeks over all. Pour a scant 1/4 cup of the chèvre mixture over the leeks. With the end of a butter knife, poke the egg mixture around a little in the leeks to release any air pockets. Use any remaining liquid to top off any crust cups that seem to have slightly lower levels.

Follow the  recipe above, omitting butter and leeks and adding 1/4 cup maple bacon onion jam (or other flavor of choice).

Other ideas: Instead of jam, add a sautéed or roasted vegetable such as kale or cauliflower, chopped fine. Or even some sautéed ground meat or sausage taken out of the casing. This is a chance to be creative!

In step 6, divide the chèvre mixture evenly among the muffin wells, then place a teaspoon of jam on each tart; it’s fine if it sinks a little or a lot. 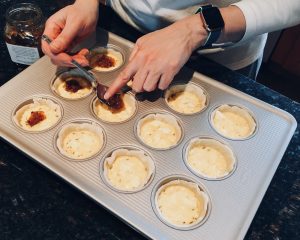 Proceed with the recipe.

This is a simple piecrust recipe, perfect for quiches, galettes, and other savory crusted dishes.

Combine the flour, salt, and butter in a food processor and process until a granular mixture is achieved. With the processor running, gradually add the ice water through the opening of the processor lid until the dough balls up. This should only take a few minutes from start to finish.

On a floured work surface, shape the dough by hand into a thick disk and wrap in plastic wrap. Refrigerate until firm, at least 1 hour, before using. At this point, the dough can be refrigerated for up to 2 days, or frozen for 4 to 6 weeks.

If the recipe does not specify a particular way to roll out the dough, use a rolling pin to roll it into a wide circle, about 15 inches in diameter. Carefully transfer the crust circle to the pie plate. One way to do this is to roll the dough partially onto the rolling pin so that half of the crust is supported by the pin and the other half hangs down. Transfer the crust to the pie plate and unroll to allow it to gently like in the pie plate. Press down the center gently with your fingers and up the sides. Trim any crust overhang according to the recipe instructions.

We are using these blog posts to share farm updates for sourcing products during social distancing. Here’s what was posted Sunday, April 12th. Be sure to check the profile before heading over. 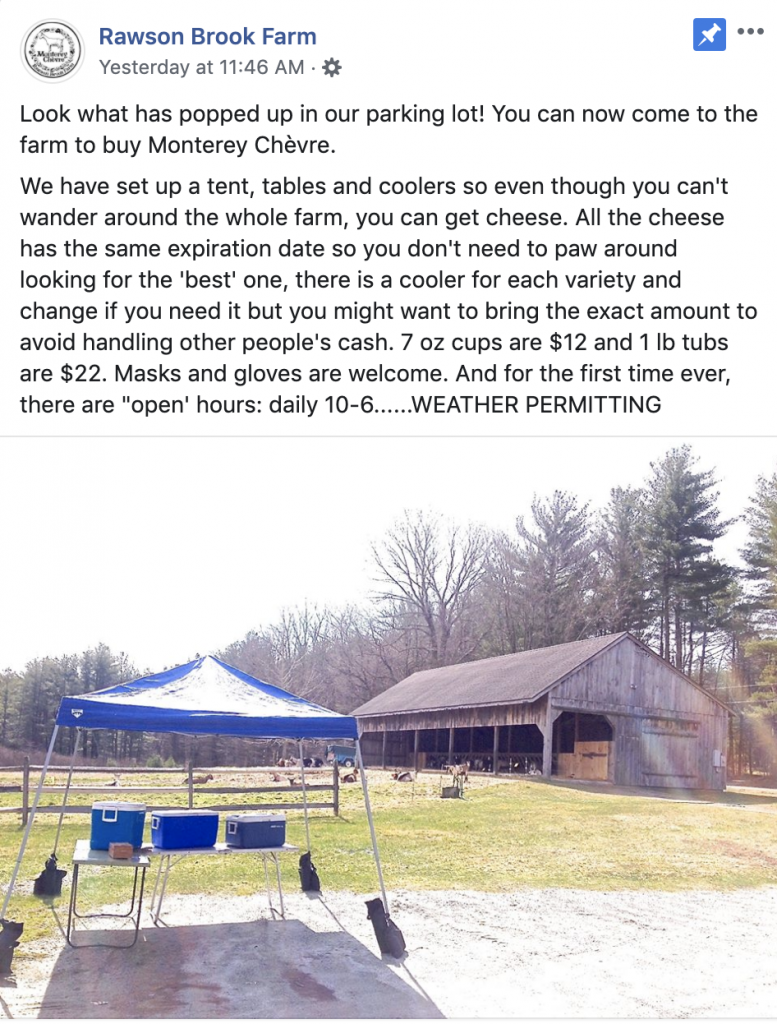 And check out this photogenic goat from Rawson Brook Farm. Rob took this photo during our four-year journey getting to know the local farmers profiled for the cookbook. 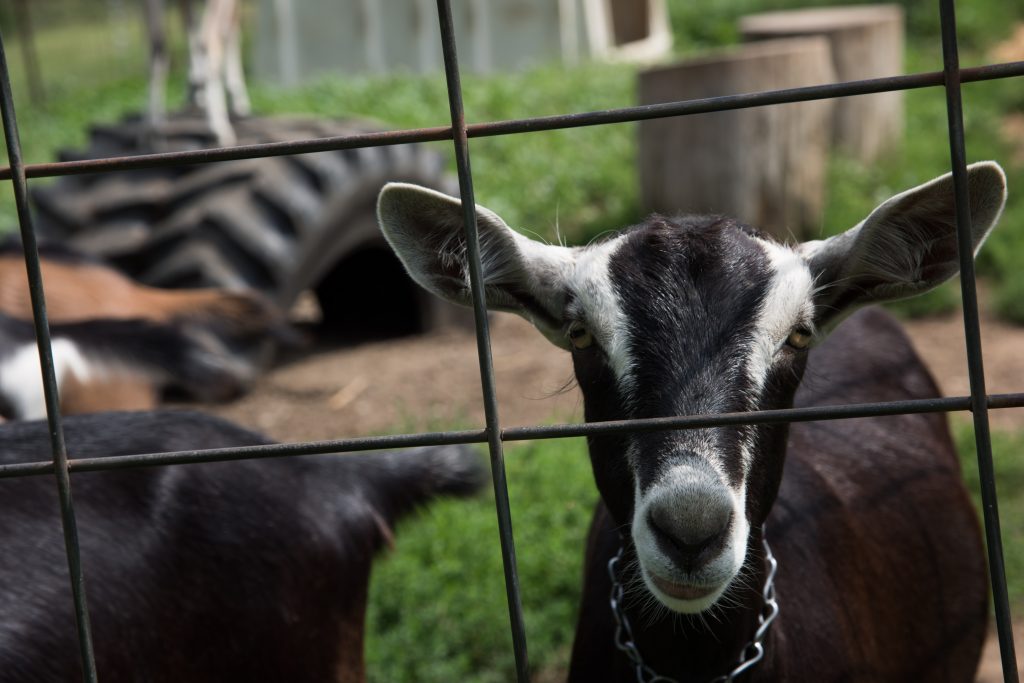