In the weeks leading up to the May 19 launch of The Berkshires Farm Table Cookbook, we are cooking—and sharing—recipes from the book that put in-season picks to good use. We are also focusing on recipes that call for pantry staples, like the sugar and spices in this tart-sweet rhubarb compote.

Our friend, recipe tester, and guest blogger Elizabeth Baer, of CulinUrsa, recently paired the compote with grilled pork. Here’s what she had to say.

Cooking with Rhubarb
By Elizabeth Baer

On May 19, just about the time when you’ll be getting your pre-ordered copy of The Berkshires Farm Table Cookbook, rhubarb will be coming into season! As luck would have it, there are two rhubarb recipes in this book, so you’ll have something to try even this early in the season. There is a strawberry-rhubarb pie, with the variation of it being a Dutch-style pie (inspired by The Berry Patch). And then there is a recipe for a savory rhubarb compote.

The recipe is inspired by Moon In The Pond Farm, which is located in Sheffield, MA, and prized for its heritage-breed meats. In addition to rhubarb, owner Dominic Palumbo harvests heirloom vegetables and offers eggs, honey, and fruit from fellow farmers to members through its CSA shares. 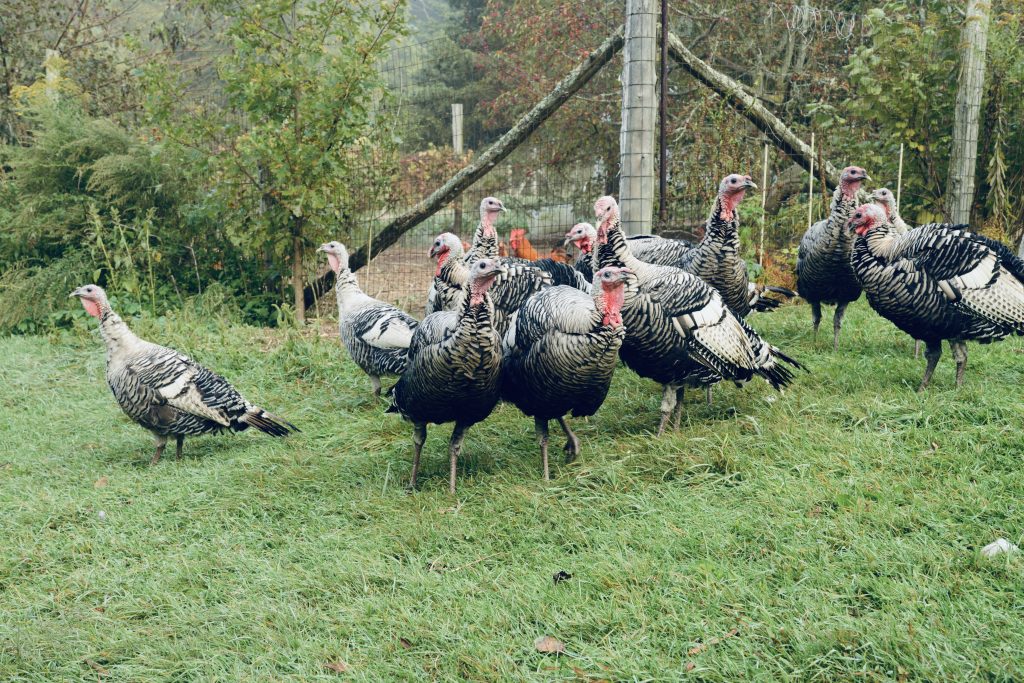 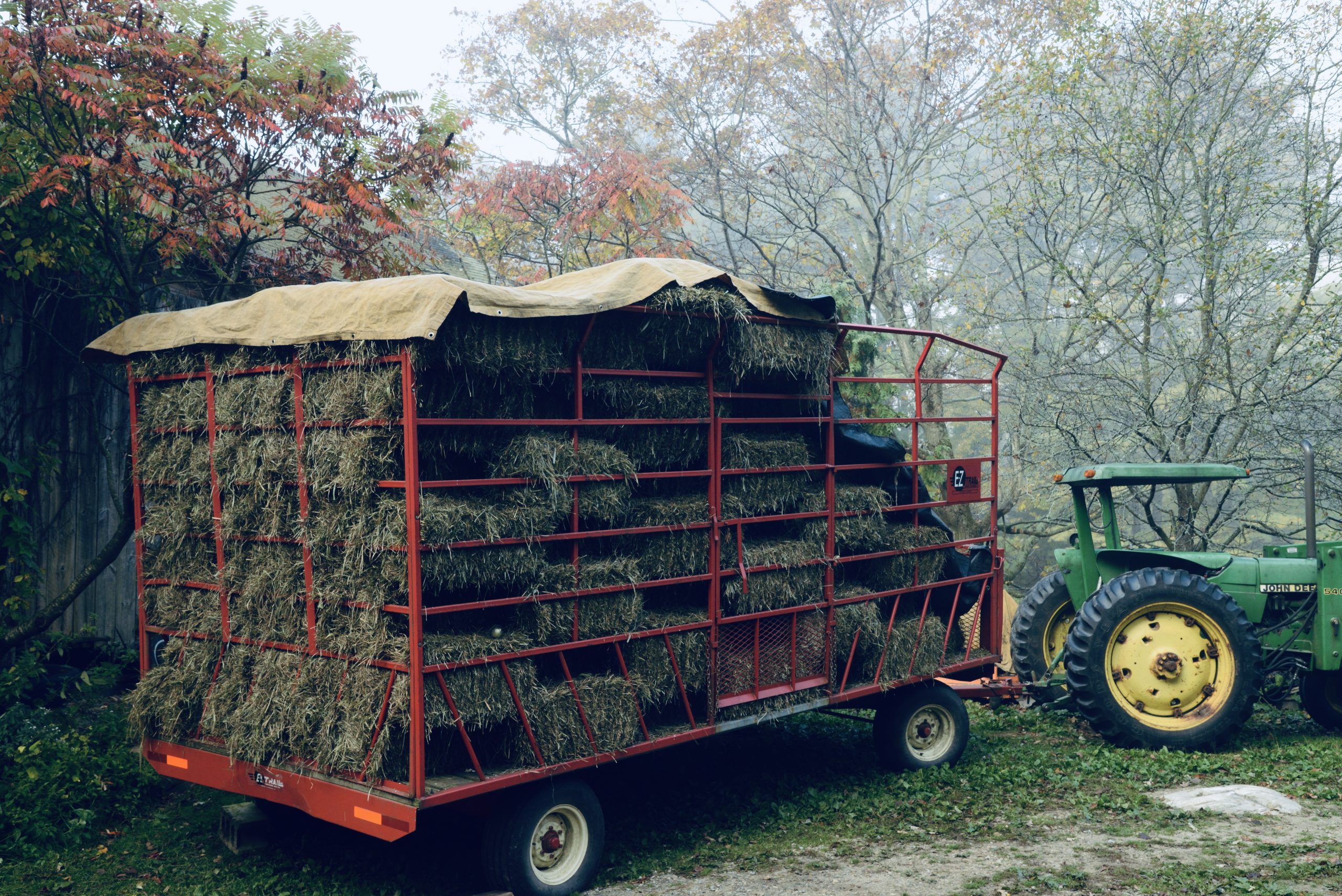 During normal times, Palumbo hosts farm visits, and has a pop-up farm stand every Friday in front of Rubiner’s Cheesemongers, on Main Street in Great Barrington, MA. For now, the farm is taking online orders for fast and safe pickup by clicking here (see below for the logistics). 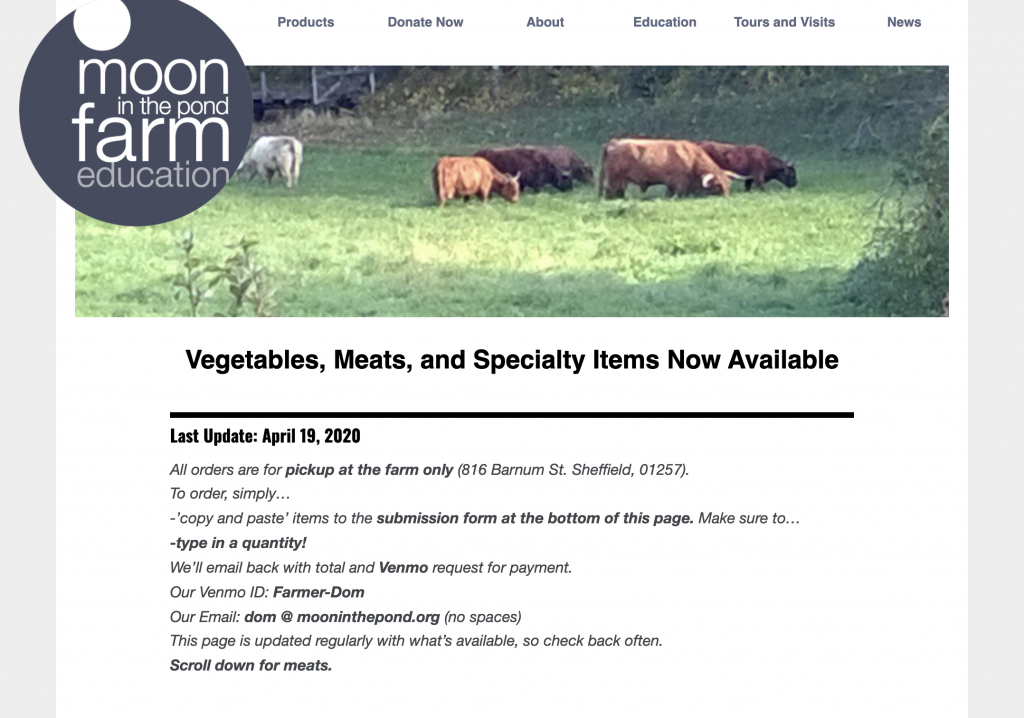 You may be wondering what one might do with a savory rhubarb compote, so I’d like to give you some suggestions. (As an aside, the headnote for this recipe includes some thoughts on a sweet variation, and I know from my recipe-testing experience this was wonderful when served with maple cheesecake, also in the book!)

I garnered favorable feedback serving the savory rhubarb compote with cheese and crackers. Although rhubarb is technically considered a vegetable, there is a fruitiness to it. So just like a slice of apple or a dollop of preserves, this compote complements cheese beautifully. I’d guess it would be good in a grilled cheese sandwich too.

There are also many meats for which this compote would be a great condiment. A roast chicken and pan-roasted duck breast come to mind. I’ve even had success serving fruit condiments, such as Vivian Howard’s blueberry barbecue sauce, with lamb chops, and I expect this condiment would work in that capacity as well. (Yes, Vivian’s recipe is for chicken, but the sauce tastes great with other things.)

And then there’s pork, which has an affinity for fruit, as evidenced by the classic pork chops and applesauce. But pork chops? Unless you get them fresh from a farm—and I encourage you to order your meats this way right now, including from Moon In The Pond Farm if you are in the Berkshires—these lean cuts can end up dry and tasteless. My easy brine, however, has never failed to produce grilled pork chops that are moist and tasty. I now use this every time we grill pork chops, including when I tested the rhubarb compote. It was a terrific match!

Inspired by Moon In The Pond Farm

1. Combine all the ingredients, except the rhubarb, in a large saucepan and bring to a simmer over medium heat. Stirring frequently to make sure the sugars don’t burn, let simmer for about 10 minutes, or until the sugar is fully dissolved.

2. Add the rhubarb and continue to cook, stirring often, until tender and the sauce is slightly thickened, 10 to 15 minutes. Remove from the heat and let cool before pouring into a quart-size glass jar or other sealable container. Seal and store in the refrigerator.

*Recipe reprinted from The Berkshires Farm Table Cookbook with permission from The Countryman Press.

Brine for Pork Chops
Makes enough for 2 to 4 chops

When I cook fennel, I save the trimmed tops—with their frilly green fronds—in the freezer for this purpose. They give the chops great flavor, but are entirely optional. 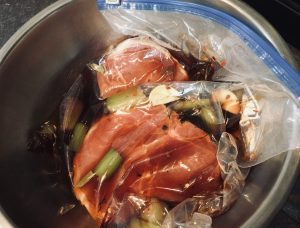 2. Place a plastic zipper bag in a bowl (in case of any leaks) and put the pork chops inside the bag. Add the fennel tops (if using), garlic, bay leaf, red pepper flakes, and peppercorns.

3. Pour the brine mixture into the bag. Squeeze out as much air out as possible, then seal the bag. This allows you to make less brine, as more will be in contact with the meat. Let marinate in the refrigerator for 4 to 8 hours, turning the bag over once or twice during this time.

4. Take the chops out of the brine and pat dry. Discard the brine. Cook the pork chops as desired and serve with the rhubarb compote from The Berkshires Farm Table Cookbook.

I also sautéed some baby bella mushrooms and roasted purple brussels sprouts to round out the meal, as shown below. 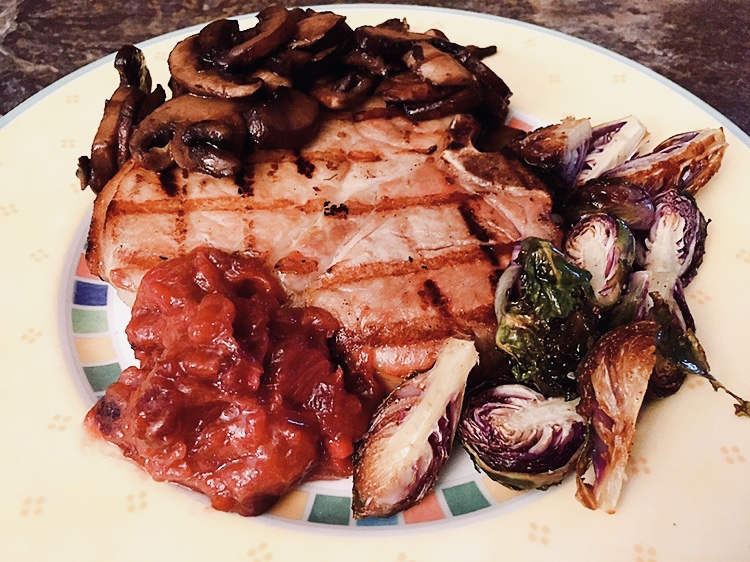 Previous Post: « Our Cookbook Update
Next Post: The Berkshires Farm Table Cookbook launches on May 19! Pre-order your copy today. »